Ajay Chawla delighted in exploring the mechanics of everyday objects from an early age. At first, he recalls, “I spent most of my time taking things apart and not putting them together.” This impulse served him well in school, where he was drawn to math and science, and considered a career in chemistry. 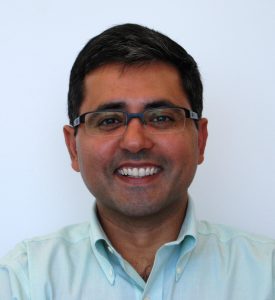 As an undergraduate at Johns Hopkins University, Chawla majored in bioengineering, attracted by the challenges and possibilities of this emerging discipline. He joined the laboratory of microbiologist Robert Maier (now at the University of Georgia), where he investigated the metabolism of Azotobacter vinelandii, a soil bacterium that converts its food into usable energy with remarkable speed. Chawla helped to isolate and study the genes encoding the bacterium’s cytochrome d oxidase, an electron-transporting enzyme embedded in the cell membrane.

This experience fueled Chawla’s fascination with biology and led him to pursue interests in both research and medicine in an M.D.-Ph.D. program at the University of Pennsylvania. His graduate work focused on parsing the functions of nuclear receptors—transcription factors that were known to regulate metabolism and appeared to play pivotal roles in heart disease and diabetes. 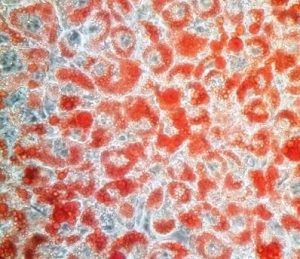 Working with endocrinologist Mitchell Lazar, Chawla explored the activities of a nuclear receptor called peroxisome proliferator-activated receptor gamma (PPARG), finding high levels of PPARG expression in the fat cells (adipocytes) of mice. Chawla documented the striking rise in PPARG levels during the differentiation of adipocytes from their precursor cells.

But directing the fate of fat cells was not the only purpose of PPARG: the receptor also participated in the formation of foam cells—lipid-packed macrophages (a type of white blood cell of the immune system) that are a hallmark of arterial plaques. And PPARG seemed to be involved in regulating insulin resistance, as a new class of antidiabetic drugs called TZDs had been shown to act through PPARG.

In parallel with his medical residency at the University of California, San Diego, Chawla pursued postdoctoral research with Ronald Evans at the Salk Institute for Biological Studies. Continuing his investigations of PPARG, Chawla showed that its activation could lead foam cells to shed their accumulated cholesterol. And in mice genetically prone to hardened arteries, introducing macrophages lacking PPARG caused more severe arterial lesions. These results helped to explain why TZDs tended to keep arteries clear, and provided genetic evidence that PPARG played a role in coronary artery disease.

Chawla became a Rita Allen Foundation Scholar in 2003, shortly after establishing his own research group at Stanford University. There, he discovered that in macrophages, PPARG directs a pathway of “alternative activation,” distinct from classic bacteria-fighting activities, that reins in insulin resistance.

“[The award] provided me recognition, in the sense that an elite group of scientists have gone through this path before—and it puts you with them. And then the expectations are also pretty high that you’re going to do something equivalent or something similar.”

Since joining the faculty of the University of California, San Francisco, in 2010, Chawla and his group have mapped even more intersections between metabolism and the immune system. Their work has provided evidence that macrophages infiltrate nearly every organ of the body, and working together with other immune cells, they contribute to tissue regeneration,and even enable fat tissue to generate heat in response to cold temperatures.

Here, Chawla discusses his career path, his approach to research, and his latest venture—deciphering the details of how mammals adapt to the cold.

After your initial interest in engineering, what made you decide to go to medical school, and then to pursue research full-time?

I’m one of those people who had to try different things. It wasn’t clear to me what I wanted to do with my life—I wasn’t preprogrammed. I went through college wanting to be a biomedical engineer, and that was after wanting to be a chemist. And then I wasn’t sure if I wanted to be an engineer or a physician or a scientist.

So I went to medical school. But within a week, I realized I couldn’t do it—it was very different from engineering. So I entered the M.D.-Ph.D. program. And even during my clinical training, I would get up in the morning, and I would always think about what was going on in the lab. That was a very clear internal guide for me.

I don’t see patients anymore, but I still value every moment of my medical training, and it has provided me with a very interesting perspective on biological problems. My true love, though, is at the bench. There’s nothing more exciting than discovering something new in the lab.

You’ve uncovered many unexpected roles for immune cells—in arterial disease, insulin sensitivity, adaptation to cold…how do you figure out what to study next?

I call it “following your nose.” You get data in the lab that suggests something, and you just follow it. But I have a couple of filters that I use, which came from my mentors.

One is that the first observation, if you’re going to follow it, has to be pretty robust. Because by the time you drill down into the mechanism, if it’s small, you’ll lose this effect. Second, for every experiment you do, think about three steps ahead, and do the thought experiment. And at the end, ask yourself what you’ve discovered, and how important it is—be honest about it.

Over time, my interests have shifted into trying to understand how the immune system is not only controlling metabolism, but also participating in other programs—dealing with environmental changes, dealing with tissue repair mechanisms and other things. This was understudied, although people are starting to study it more now. It’s exciting, because when something is understudied, you have more opportunities to discover new things.

What is one of the big questions you still want to answer?

I have a fairly good-sized effort right now trying to understand how organisms—in particular, mammals— adapt to changes in the environment. We’re using the experimental paradigm of cold to understand the process.

But when you require adaptation and acclimatization for longer periods, it turns out that the innate immune system participates. This provided us with an experimental paradigm to try to understand how immunity instructs acclimatization to environmental cold.

How our bodies adapt to the cold seems like such a fundamental question. Why is so much still unknown about this?

We have ignored cold in some ways, because we can regulate our environmental temperature. When was the last time you actually felt really cold? You change the thermostat in your home or office, or wear warmer clothing. So we don’t pay attention to it much.

Using the mouse as a model, we want to understand the signals and mechanisms by which a mammal acclimatizes to colder temperatures, and then to try to figure out how that knowledge can be applied. If you know how to turn on a program that is very thermogenic and catabolic, it can perhaps also be used for tackling disease states like obesity.