While most sleep research is conducted using laboratory mice, David Prober studies the molecular basis of sleep in the zebrafish, a small freshwater tropical fish that populates many pet store aquariums. Zebrafish have several surprising advantages for understanding how sleep works. Unlike mice, which are nocturnal and sleep in spurts throughout the day, zebrafish, like humans, are diurnal—active during the day—and spend most of the night asleep.

We spend a third of our lives sleeping, yet very little is known about why we need sleep or how sleep is regulated. According to Prober, one reason could be that until relatively recently—about 15 years ago—sleep was predominantly studied in rodents. Zebrafish, meanwhile, have anatomically similar brains to other vertebrates, including humans, but their brains are smaller—with tractable, easier-to-dissect neural circuits that can be readily imaged, thanks to their transparent bodies. “There are about 100-fold fewer neurons in the fish compared to the mouse. The zebrafish provides a much simpler system to figure out how neural circuits regulate behavior,” Prober says. 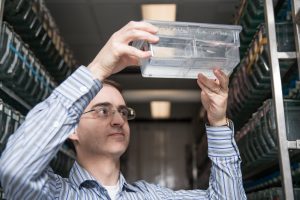 David Prober is a 2010 Rita Allen Foundation Scholar and an Assistant Professor of Biology at the California Institute of Technology. Here, Prober examines a zebrafish—his laboratory uses this species as a model for understanding sleep.
(Photo: Caltech)

Prober first got a taste of research as an undergraduate at the University of Manitoba in Canada, where he worked in three different laboratories. The experience made him want to pursue research as a career. As a graduate student, Prober joined the laboratory of Bruce Edgar (a 1995 Rita Allen Foundation Scholar) at the University of Washington in Seattle, where he examined the role of oncogenes such as ras and myc during development of the fruit fly. Prior tissue culture studies had suggested that mutated Ras and Myc cause cancer by promoting cell cycle progression and cell proliferation. Prober found that in the context of an intact tissue, Ras and Myc don’t regulate the cell cycle directly, but rather promote cell growth, consistent with a role for these genes in driving the increase in tissue mass that underlies cancer. This was not previously appreciated, according to Prober, because cell mass is not typically measured using cell cultures.

The research appealed to Prober in part, he says, because it addressed relatively old scientific questions using new methods that allowed for novel discoveries. “That really impressed upon me the power of looking at old problems using new approaches to drive new discoveries.” Prober has been applying that lesson throughout his career.

“After I got my Ph.D., I decided that I wanted to go after a big problem that has proved to be relatively intractable to solving, and sleep stood out as a mysterious and important problem. We still don’t understand very well how sleep is regulated.” 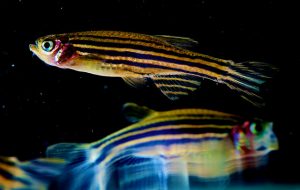 Prober then joined Alexander Schier’s laboratory at the Skirball Institute of Biomolecular Medicine at New York University. There, Prober and his colleagues established zebrafish as a model for sleep and performed a drug screen on zebrafish, identifying molecules that perturb the normal sleep/wake cycle in zebrafish larvae. Some of the drugs tested were already known to affect mammalian sleep, and most of these drugs altered fish sleep behavior in a similar manner, validating zebrafish as a model for the neurochemistry and molecular biology of sleep. This was the first drug screen in a vertebrate to examine effects on behavior.

In 2009 Prober established his own laboratory at the California Institute of Technology, and became a Rita Allen Foundation Scholar the following year. His group recently published results from a genetic screen that Prober began as a postdoc more than six years ago. His overexpression screen used a clever twist that overcomes some challenges of classic genetic screens, identified genes that regulate sleep and wake states, and revealed a novel neuropeptide that inhibits sleep in zebrafish larvae. Prober’s laboratory is now following up on other genes identified in this screen.

Here, Prober discusses how he came to study the molecular basis of sleep, the controversy over some of his findings, and why pursuing the question of why we sleep is not interesting to him.

Why did you decide to switch from studying oncogenes in fruit flies to the science of sleep in zebrafish?

After I got my Ph.D., I decided that I wanted to go after a big problem that has proved to be relatively intractable to solving, and sleep stood out as a mysterious and important problem. We still don’t understand very well how sleep is regulated. At that time, the zebrafish was just starting to be seen as a useful model system for behavior. Because you can do genetic screens [which are difficult to perform in rodents], and because zebrafish have relatively simple and transparent brains, it seemed like a system that might help to break the logjam in the sleep field. 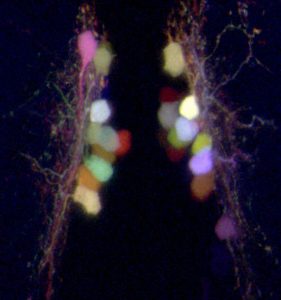 Individually labeled neurons in a 5-day-old zebrafish larva expressing the “Brainbow” transgene, which allows each hypothalamic wake-promoting neuron to be labeled with a different color. This technique allows Prober and his research group to trace each neuronal projection throughout the whole animal.
(Image: David Prober)

What aspect of your research is most exciting to you now?

This discovery gets a funny reaction from circadian biologists who work on rodents, who tell me that melatonin is not important because most lab rodent strains don’t make melatonin and melatonin does not put these animals to sleep. However, there are good reasons to think that melatonin should not induce sleep in nocturnal animals. Similar to zebrafish, melatonin induces sleep in humans, but it is not as powerful as commonly used sedatives like Ambien. This actually makes sense, because you don’t want the natural mechanism that regulates your sleep to be as powerful as Ambien, which puts you to sleep for eight hours no matter what, which would be very maladaptive. Having shown that melatonin is required for the circadian control of sleep, we now need to figure out how it does this.

What is our understanding of why animals need sleep?

Researchers have come up with evidence for at least a half dozen possibilities. One suggestion is that sleeping cleans out waste that accumulates in our brains while we’re awake. While this may be the case in advanced animals such as mammals, it seems unlikely to me that that’s why simpler animals like roundworms or fruit flies sleep. I think the most compelling theory right now, proposed by Giulio Tononi and Chiara Cirelli at the University of Wisconsin, is that when we are awake, we take in information and learn, which builds new synapses. If this were to go on indefinitely, we would eventually run out of room for new synapses and be unable to learn. According to this theory, synapses that are generated during wakefulness, particularly those that are weak and not very important, are removed during sleep. This allows one to wake up the next day refreshed and able to learn again.

This theory would explain why any animal with even a simple nervous system would need to sleep on a daily basis. But it could be that many of the proposed theories are true, and it would be hard to figure out which is the most important. To me, the question of why animals sleep isn’t a very satisfying research pursuit, because I don’t know how you know when the question has been answered. In contrast, figuring out how sleep is regulated is concrete, with testable hypotheses and experiments that can provide clear answers.