When asked if he has any advice for young researchers, David Sabatini emphasizes the importance of approaching problems in creative ways. He speaks from experience: As a graduate student at Johns Hopkins University, he struck out on his own rather than undertaking one of the existing research questions in his advisor’s lab.

At age 24, he led studies that uncovered a key regulator of cellular growth. More recently, he has emerged as an authority on applying the precision DNA-editing technique CRISPR/Cas9 in human cells. 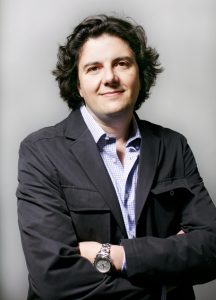 Sabatini credits his mentors and parents for inspiring his love of research and his powers to think imaginatively. Raised by a cell biologist father and a pathologist mother, he worked as an undergraduate at Brown University with Albert Dahlberg, who studied bacterial ribosomal RNA.

Sabatini entered the M.D.-Ph.D. program at Johns Hopkins in 1990 and joined the laboratory of Solomon Snyder, a well-known psychiatrist, neuroscientist and pharmacologist. “One of the most valuable things I received from Solomon was tremendous freedom to follow my own scientific interests,” says Sabatini.

On his own initiative, Sabatini decided to probe the functions of rapamycin, an antibiotic originally isolated from soil bacteria in the early 1970s that was used as a control drug by the Snyder laboratory and was already in development as a clinical drug for organ transplant patients (the drug was later approved by the Food and Drug Administration). In the early 1990s, the molecule’s effects on cells and tissues were virtually unknown. “At the time, rapamycin was neither well studied nor famous,” says Sabatini.

In Snyder’s lab, Sabatini discovered the protein target of rapamycin in mammals, known as the mammalian target of rapamycin (mTOR—also called RAFT1). It turned out that mTOR, a serine/threonine kinase, is at the center of numerous signaling pathways for communication both within and between cells, including those that regulate cell metabolism, proliferation, growth and survival. Because of its central role in these processes, mTOR has since been connected to many diseases, including cancer and diabetes. By the time Sabatini returned to the medical school component of the M.D.-Ph.D. program, he was convinced that research, rather than clinical practice, would be his focus. “I ended up falling in love with the process of scientific pursuit,” he says. 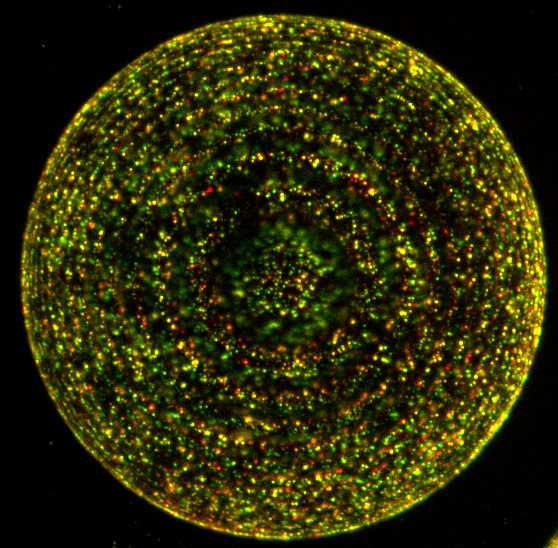 Rita Allen Foundation Scholar David Sabatini studies signaling pathways involving the mTOR kinase, a key regulator of cell metabolism, proliferation, growth and survival. Using in vitro techniques, Sabatini’s lab has uncovered the details of mTOR pathways. In one experiment, the lab recapitulated the observation that inside cells, mTOR localizes to lysosomes—cell organelles involved in nutrient homeostasis and quality control—in the presence of amino acids: Here, lysosomes (red)—are pre-bound to the surface of agarose beads. The mTOR protein (green) is then added and, in the presence of amino acids, binds to the lysosomes, making them appear yellow.
(Image: Roberto Zoncu, Sabatini Lab, Whitehead Institute)

After completing his degrees, Sabatini became a Whitehead Fellow at the Whitehead Institute for Biomedical Research in Cambridge, Massachusetts, which allows select young scientists to run their own labs without the teaching obligations of professors. He continued to study mTOR signaling, discovering that within cells, mTOR is part of two large multiprotein complexes called mTORC1 and mTORC2 that are part of distinct signaling pathways. The mTORC1 pathway is a master growth regulator that couples nutritional and environmental signals to promote cell growth, while mTORC2 is thought to promote cell survival.

“Our lab does a lot of metabolism work, and researchers tend to study metabolism in just intact cells. I think we need to know about different compartments in the cell and what’s inside them. Getting into the cell and measuring things within the cell is quite a challenge, and we’re trying to address that.”

In 2002, Sabatini was appointed an assistant professor of biology at the Massachusetts Institute of Technology and a member of the Whitehead Institute for Biomedical Research. He was selected as a Rita Allen Foundation Scholar in 2004, having proposed to tease out the signals that regulate mammalian cell growth—the accumulation of cell mass and increases in size—through the mTOR pathway. Sabatini identified several key players, including Rictor (rapamycin-insensitive companion of mTOR), part of the mTORC2 complex that regulates insulin signaling. Sabatini’s team linked mTOR to critical pathways mutated in cancer: his team found that mTORC2 directly activates another signaling protein, Akt, that is deregulated in many types of cancer and that has roles in insulin signaling and glucose sensing. They also found one of the first factors that signal the level of amino acids to the mTORC1 pathway.

In addition to mTOR signaling, Sabatini’s lab studies how nutrient metabolism is different in cancer compared to normal tissue. His group is working to characterize essential genes in the human genome, and has helped to develop large-scale lab tools such as a genetic screen applying CRISPR/Cas9 genome editing in human cells.

Here, Sabatini shares advice for young researchers, and reflects on his career-spanning work on mTOR and the challenges of studying signal transduction.

What advice do you have for those just starting out in research?

What I try to emphasize to students is the importance of developing how you think about new problems. I think the hard part of biology is determining what to study, because once you pick a topic and begin to make inroads, you know what you’re going after and you follow your results. But deciding what to work on and being creative with that, I think, is very hard, particularly if you’re going to do things that are new and original.

I’m not sure what the secret is for making that choice. A little bit of it is gaining some experience in conducting research and being willing to just try things. That’s what I learned from Solomon [Snyder]—that it’s OK to just try things. I try to teach my students not to talk themselves out of doing something, but to at least try. I also have encouraged people not to do the next follow-on thing. When students come to me after reading a new paper and say, “Now we can do this next thing,” I don’t like that. I really prefer to do things that are original to our lab.

What has continued to capture your attention since your early scientific career?

Early on, even when I just started my lab and had been working on mTOR, what always fascinated me was the sensing of nutrients. I was interested in sensing in general—how we sense our environment. Part of that had come from classes at Johns Hopkins, where the neuroscience classes had sections on sensing—how pH and temperature are sensed.

At the time, we actually didn’t know most of the molecular basis of these things. But I always thought that was kind of cool: how the stomach knows it’s full, for example. The mTOR pathway was known to be sensitive to nutrients, and in particular to amino acids. I think in many ways the most significant work that we’ve done, and are doing, is figuring out the molecular basis of amino acid sensing.

How does that actually happen? We are now finding the actual sensors of amino acids and seeing the structures of these molecules. To me, that’s the most fun work that I’ve done, because it dates back to my Ph.D. Maybe this is very noncreative, but I’ve continued that research and I think it’s been quite productive to see this pathway unravel. My training, especially the big-picture training by Solomon, has really enabled this research. He taught me to do my own thing and not worry about risk. Of course, the risk has to be supported, which is where funding like the Rita Allen Foundation’s and the generosity of the Whitehead Institute in general have been key for me.

Are you thinking about any research questions that can’t be answered using current technology and will require new tools?

I think we’re at this pretty amazing time in biology for measurements. We’re able to measure quite a few things at sensitive levels. What I like about the state of technology now is that there are so many questions we can ask with what exists. We can measure the genome by sequencing it, we can sample the proteome and we can measure metabolites. We can also perturb the genome using CRISPR, which is highly enabling, even though dealing with redundancy in the human genome is still a challenge.

Our lab does a lot of metabolism work, and researchers tend to study metabolism in just intact cells. I think we need to know about different compartments in the cell and what’s inside them. Getting into the cell and measuring things within the cell is quite a challenge, and we’re trying to address that.

Another challenge for people like me, who have done a lot of research on signal transduction, is that much of it is in cells in culture. Now we need to understand how these pathways work in vivo in different tissues. Biology reuses pieces, so the big challenge will be to figure out how these standard pieces we’ve identified are modified in various tissues and in different disease states.