Early in his research career, Jeffrey Macklis set out to unite two seemingly disparate fields of neuroscience: neural development and brain repair. At the time, this was an unorthodox idea, and “being a brain repair guy was a little shady,” he says. Still, he thought, “if we figured out how the brain was built, then maybe we could figure out how to rebuild it or fix it, and we might also be able to figure out something about why it breaks.” 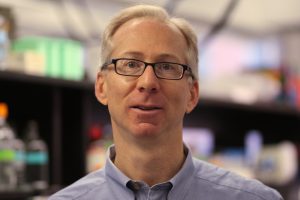 Macklis has made strides in understanding the cells and pathways of the brain’s cerebral cortex, the outer layers of tissue critical for voluntary movement, sensation, thinking, memory, language and consciousness. His research has shown that it is possible to rebuild cortical circuits by coaxing new neurons integrated in the adult brain into specific developmental tracks. And Macklis continues to explore the origins of nerve cell diversity, providing insights into autism, neurodegenerative diseases and spinal cord injuries.

Macklis earned bachelor’s degrees in both bioelectrical engineering and literature from the Massachusetts Institute of Technology. During his junior year, his research mentor, mechanical engineering professor Ernie Cravalho, encouraged him to apply for early admission to the Harvard/MIT Health Sciences and Technology (HST) program, which integrates science and engineering with medical training. In an HST neuroscience course, Macklis arrived at an unexpected realization during a neurophysiology lecture by “this curly-haired Swedish guy by the name of Torsten Wiesel” (a 1981 Nobel Laureate and an emeritus member of the Rita Allen Foundation’s Scientific Advisory Committee).

“He showed us amazing experiments on vision in cats, using electrical recordings,” Macklis recalls. “What I saw was the brain as a machine that also thought. That at connected [my interests in] literature, philosophy, intellectual history and biophysics, and all of a sudden my whole world came together and I said, ‘I want to do that.’”

Wiesel graciously invited Macklis to talk neuroscience over tea and cookies, and, based on Macklis’ desire to investigate how the brain is built, suggested he reach out to Harvard’s Richard Sidman. Macklis describes Sidman as “at that time among the world’s leading developmental neurobiologists” who had “pioneered the ideas of genetic underpinnings of neuron- and circuit-specific development and degeneration before molecular manipulation of the nervous system existed.” Macklis conducted both graduate and postdoctoral research in Sidman’s laboratory, where he focused on myelinating glia and their mutations, biophysical approaches for targeted activation of long-distance circuits, and cell type-specific neuronal degeneration to investigate integration of new neurons.

“What I saw was the brain as a machine that also thought. That connected [my interests in] literature, philosophy, intellectual history and biophysics, and all of a sudden my whole world came together and I said, ‘I want to do that.’”

Macklis began his own research program at Harvard Medical School, and in 1991 he was selected as a Rita Allen Foundation Scholar. He recalls that the Foundation’s Scientific Advisory Committee (including Wiesel) was surprisingly receptive to his idea of combining studies of cortical development with neuronal repopulation and regeneration. The award “gave me a mandate and provided some resources to just go after these venturesome combinations of fields,” he says. “That really enriched the lab, and let us take some risks in directions that I otherwise would have been a bit hesitant to go in.”

Using mice as a model for brain development and neuronal repopulation from progenitors, Macklis induced selective degeneration of subtype-specific neurons in the neocortex. He showed that under the right conditions, transplanted embryonic neurons could migrate to new positions, acquire correct neuron subtype identity and begin to restore functional connectivity to long-distance targets. His group’s subsequent work examined the mechanisms behind this regeneration, which contributed to the seminal finding that progenitors already existing within the adult brain are capable of being manipulated to generate new long-distance cortical “projection” neurons, partially repairing degeneration of circuitry in the neocortex. 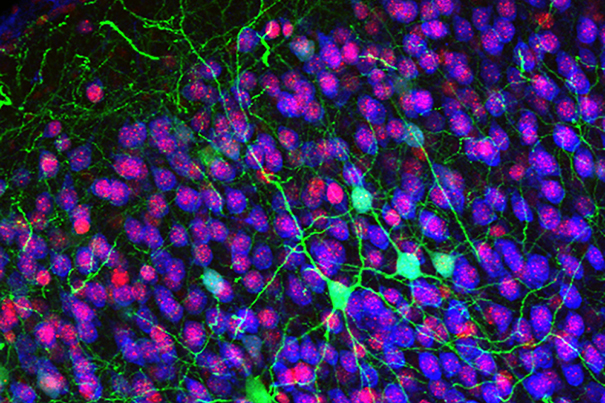 Rita Allen Foundation Scholar Jeffrey Macklis studies the development of the cerebral cortex, the most complex, outer layers of the brain critical for voluntary movement, sensation, thinking, memory, language and consciousness. Shown here are callosal projection neurons (green), which connect the two hemispheres of the cerebral cortex and are known to develop abnormally in some cognitive disorders.
(Image: Jessica MacDonald and Jeffrey Macklis)

Macklis joined the Foundation’s Scientific Advisory Committee in 2007. Today, Macklis and his team have broadened their investigations of the cerebral cortex, working to more deeply understand molecular controls over development and diversity of neuronal subtypes, the subcellular mechanisms guiding the formation of axons and synapses, and how these processes are perturbed in developmental and neurodegenerative diseases.

Here, Macklis recalls his early impressions of science and engineering, and reflects on some of the highlights from his research career.

How did you first get interested in science, and what was your first research experience?

My father was an aerospace engineer who worked on the space program. I was surrounded by telescopes, gyroscopes and early computers; I traveled to launches at the Kennedy Space Center and watched satellites and manned spacecraft being built. But I was also observing grasshoppers and frogs and crayfish from local creeks, and trying to figure out how muscles moved limbs, and how frogs caught flies. I think I was always interested in some combination of biology and machinery.

In high school, I thought maybe I would be a physicist who studies people, but I didn’t know what that meant. In a National Science Foundation-sponsored program for high school seniors at the University of Pennsylvania, we had Tuesdays and Thursdays for independent pursuits, and I wanted to use that time to see what academic research was all about.

I got involved in a wonderful lab [led by] Professor Fred Ketterer. He enabled me to basically be his undergraduate thesis student, and then, because I did well with building instruments and inquiring about cellular membranes in a quantitative way, he let me have more freedom. Fred was my earliest research mentor, and he was very generous with me.

How has your work changed our understanding of development and repair in the cerebral cortex?

When I started my lab there was very little knowledge about integrating new neurons into existing circuitry to repair that original circuitry in the brain, and in fact the dogma was that it was ludicrous to have goals in that direction. It was largely thought that mammalian brain circuitry was complete, developed, hardwired. Cerebral cortex circuitry in particular was considered by many to be much too complex for regeneration. My lab produced some of the first evidence that under the right cellular conditions, with open synaptic space, we could manipulate precisely correct immature developmental neurons to rebuild cortical and other brain circuitry that connected across long distances and regenerated functional circuitry.

At that point, others had identified that there were progenitors—what some in the field now would call stem cells—resident in the brain in a couple of locations, making new neurons in the hippocampal dentate gyrus and the olfactory bulb, which deal with memory and smell, respectively. So my lab started asking whether there might be small numbers of such progenitors in the adult brain, perhaps residual from development, that were already poised to make new neurons in the cerebral cortex—this most elegant, highest-level part of the brain that makes us think and talk and move and feel and integrate.

People thought that was a little wacky, but in the early 2000s we had a series of papers that startled the field. We were the first to show that we could make the same manipulations as before, but instead of transplanting immature neurons to rebuild circuitry, we could recruit small but real numbers of new, subtype-specific long-distance “projection” neurons from a subset of these progenitors right within the brain itself. Then we began to figure out the genes and molecules and the logical organization that build the hundreds and thousands of distinct subtypes of neurons in the cerebral cortex, which connect and integrate motor and sensory and associative, cognitive information, and provide output to the spinal cord and the outside world.

We’d like to contribute to understanding how neural wiring and circuitry get implemented at the subcellular level, and how they might go wrong or “break” later on. As genomics has gotten more and more powerful, the genes that come up in human genomic studies for neuropsychiatric diseases—from bipolar disorder and schizophrenia to motor disorders, intellectual disabilities and autism spectrum disorders—are enriched with genes that have to do with the functioning and maintenance of synapses. Synapses start their development as so-called “growth cones,” so we’ve gone directly after the molecular biology of subtype-specific growth cones.

Going all the way back to my first conversation with Torsten Wiesel in his office, I’ve been centrally interested in the notion that the way a neuron and its circuitry function is derived from how they were built. So after several years of developing new approaches and technologies, I think we’re finally close to figuring out how growth cone-guided circuits and synaptic machines are built in diverse, subtype-specific ways, and what might go subtly wrong with building those circuits and machines in a whole range of neuropsychiatric diseases.