Ming Li’s love of science began at an early age growing up in rural China. His grandparents were farmers, and he spent most of his childhood exploring the fields around his house, “being really close to nature,” as he fondly remembers. These experiences helped shape his interest in becoming a scientist, which he describes as his “dream job.”

In high school, Li was fascinated with the butterfly effect, the idea that in a deterministic nonlinear system, a small change in one place (such as a butterfly flapping its wings) can have substantial consequences elsewhere (such as a tornado on the other side of the world). “I was really drawn to the idea that there can be simple principles underlying complex phenomena,” he says. 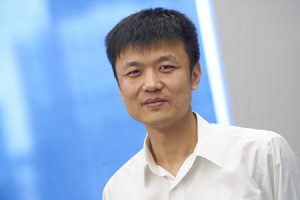 Toward the end of his senior year in college, Li had one of his first experiences grappling with a complex scientific question. His senior thesis focused on understanding how gene expression is regulated at a transcriptional level. Using in vivo footprinting, he discovered whether a transcription factor bound to a specific target gene.

“That was my first introduction to molecular biology and when I had my first intuitive understanding of biological phenomena on a molecular level,” Li recalls.

From that moment on, he was hooked. Li came to New York as a graduate student at Columbia University, where, he says, he was “really fortunate to join a young lab.” His advisor, Amer Beg, was then a new principal investigator. As Beg’s first student, Li received meticulous hands-on training and cultivated independent thinking. Li began by investigating apoptosis, a form of programmed cell death. One unexpected observation set the stage for his discovery of necroptosis—a distinctly different kind of cell death with cellular shape and appearance that contrasted with that typically observed in apoptosis. Since apoptotic cell death is very robust and prevalent in almost all cell types, this unexpected finding intrigued him. Li remembers thinking, “perhaps there’s a unique function associated with the atypical cell death response”—a line of inquiry that led to the finding that necroptosis promotes host defense against viral infections.

Committed to understanding immunological regulation beyond just the cellular level, Li joined the laboratory of Richard Flavell at the Yale School of Medicine as a postdoctoral fellow. In the Flavell lab, Li was part of a team that pioneered the use of mouse models to study immune responses. The transition from looking at biological phenomena at the cellular level to examining it at an organismal level was game-changing. He became captivated with fundamental immunological questions such as—“How does the immune system enable a robust response to infection, and at the same time maintain tolerance to healthy self tissue?” This question and the compelling results that emerged from his postdoctoral research laid the groundwork for his future lab.

Now a faculty member at Memorial Sloan Kettering Cancer Center, Li describes the current focus of his lab, which extends beyond his postdoctoral work. “When I was a postdoc in Richard’s lab, I started to think about the next frontier of immunology especially in terms of conceptual understanding and benefits for human health and society,” says Li. He began to consider the immune system’s role in cancer, a research field that is now widely appreciated, but was less valued when Li founded his lab. Under normal conditions, the immune system should have a strong response to infectious pathogens, while maintaining tolerance to healthy tissue. Li’s question was, and still is, “How does the immune system perceive cancer? It exhibits a split ‘personality’ being a villain, as it triggers pathology similar to pathogens, and a victim, as it originates from healthy tissues, at the same time?”

Li dove into the perplexing world of tumor immunology. “I wanted to understand how the immune system could evolve with a natural spontaneous tumor instead of an artificially implanted tumor in a non-natural environment,” Li recalls. He started this work at Sloan Kettering Institute, where he became a Rita Allen Foundation Scholar in 2008. The long-term support from Rita Allen proved to be important, Li says—“It took us quite a few years to get a good footing on this topic because of this challenging model.” However, the painstaking work paid off. Li still clearly remembers the day that one of his students showed him data that confirmed that the immune system recognizes a tumor as a distinct entity and could, in fact, robustly and specifically respond to a growing tumor.

Over the years, the Li lab has identified tumor-specific immune responses that have improved our understanding of the relationships between cancer and the immune system at both the cellular and molecular levels. For instance, the lab identified unique types of lymphocytes that are enlisted to combat tumors. Together with collaborators, Li’s team is exploring the possibilities of targeting these highly specialized cells for cancer therapy. It is “a really exciting moment for the lab,” Li says, with anticipation of more breakthrough discoveries to come. The team’s ultimate goal is to mobilize the immune system to eliminate cancer. “What else can be more motivating than applying the mechanistic findings to develop new drugs and help patients?” Li explains.

What do you remember about becoming a Rita Allen Foundation Scholar? How has that experience influenced your research?

At Memorial Sloan Kettering Cancer Center there were several faculty members who had received the award in previous years. So, I knew that it was a very prestigious and selective award. I was thrilled when Sloan Kettering Institute’s Director told me in late 2007 that I had been nominated for that year’s Rita Allen Foundation Scholar Award.

Initially, I thought it would be a very intense interview because the award is competitive. However, in fact, it was quite a friendly experience. Essentially, the Scientific Advisory Committee tried to evaluate how I would approach a scientific question—in what perspective I would put it in context. In retrospect, I could tell that they were looking for somebody who could think out-of-the-box, be inherently curious, and bring broad significance to his or her research program.

The experience really made me appreciate that the Rita Allen Foundation selects not just great scientists, but potential leaders in a particular field.

The award has been a tremendous confidence builder and the support has given me the freedom to test more risky ideas and explore the most exciting projects.

What do you find to be the biggest challenge in the current research landscape?

I feel really lucky for having the opportunity to develop my research program to what it is today. I was trained as a basic biologist, yet some of my research has advanced to the point that it can be further developed to make new drugs to benefit patients.

To a certain extent, I think there still is a disconnect in transforming cutting-edge research to disease treatment. There should be better systems and policies to bridge and support the translation of basic science into medicine, such as more funding mechanisms to bring in translational capabilities to academic institutions. They exist, but we need more.

What excites you as you look at the future of your research?

There are so many aspects of the immune system that can be utilized to expand the scope of cancer immunotherapy. For some patients, available drugs work very well; for other patients, they do not work at all. We are just starting to appreciate the immunological diversity of cancer. Yet, as complex as cancer appears to be, I strongly believe that “simple principles underlie complex phenomena.” In-depth mechanistic studies will ultimately bring order out of chaos.