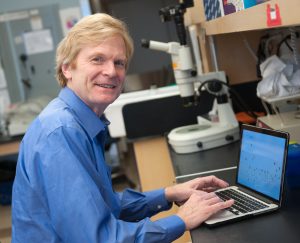 Christopher Walsh, a 1993 Rita Allen Foundation Scholar, is the recipient of the 16th Perl-UNC Neuroscience Prize awarded by the University of North Carolina School of Medicine.

“Dr. Walsh’s study of genetic mutations and gene functions associated with abnormal brain development has provided invaluable new insights into how the human cerebral cortex develops,” said William Snider, director of the UNC Neuroscience Center and chair of the Perl-UNC Neuroscience Prize selection committee, in a news release announcing the prize. “Further, his work provides a foundation for improved diagnosis and treatment of several pediatric brain diseases including autism. We are extremely pleased to welcome him as our 16th recipient of this prize honoring the late Dr. Edward Perl, a pioneering researcher at UNC for many years.”

Walsh is Chief of the Division of Genetics and Genomics at Boston Children’s Hospital and Bullard Professor of Pediatrics and Neurology at Harvard Medical School, as well as a Howard Hughes Medical Institute investigator. He earned a B.S. degree in chemistry from Bucknell University, and an M.D. and Ph.D. in neurobiology from the University of Chicago.