How does sugar influence how we eat? What role do “jumping genes” play in childhood cancers? What if bacteria in the digestive tract hold the secret to new treatments for neurological disorders?

These are a few of the big questions driving the research of the 2016 class of Rita Allen Foundation Scholars.

It is always a delight to announce a new class of Scholars, and this group is special. Not only do they hold remarkable promise as pioneering young scientists—they also mark the 40th anniversary of the Rita Allen Foundation Scholars program. We have now supported more than 150 biomedical scientists at a crucial stage of their careers, when they are pursuing critical ideas but struggling to find resources. 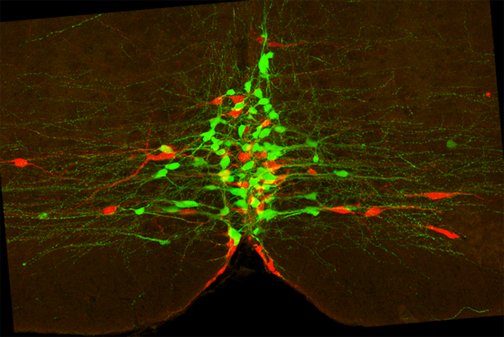 In celebration of the 40th anniversary of the Rita Allen Foundation Scholars program, we have been capturing discoveries and perspectives of Scholars from throughout the program’s history and sharing them in online profiles. Among the profiled Scholars is Susan Dymecki (1999), who studies the functions of neurons that use the neurotransmitter serotonin to communicate. Click on the image to learn more.

Camila dos Santos is a 2016 Rita Allen Foundation Scholar investigating gene expression during breast development, key to understanding why women who have a full-term pregnancy before the age of 25 have at least a 30 percent lower risk of breast cancer—and how that protection might be given to other women. She recounts the difficulty she had in seeking research funding from other sources:

“A lot of comments are, ‘Your science is very interesting but it’s very risky for a young faculty [member] to pursue.’ I understand their point of view, but there’s just one way that we can address these questions,” she says. “When we got the answer that Rita Allen had selected me as one of their Scholars this year, you have no idea how many doors that will open for us—not only because it’s a prestigious award, but it’s going to provide the funds that we have been seeking for a while to really dig down into the questions and address our hypotheses.”

As one of the longest-standing fellowship programs of its kind, the accomplishments of past Rita Allen Foundation Scholars point to the power of investing in new ideas on the basis of promise rather than proof. Together, these Scholars have received countless prestigious awards and recognition, including the Nobel Prize in Physiology or Medicine, the National Medal of Science, the Wolf Prize in Medicine, and the Breakthrough Prize in Life Sciences.

More importantly, their discoveries represent hundreds of leaps forward in our understanding of cancer, immunology, neuroscience, pain and the basic mechanisms of human life. Ultimately, they represent countless lives improved and saved—already and in the future—because of the knowledge they have helped create.

Scientific promise is difficult to pin down, which is one reason many funders prefer to support incremental research on more established ideas. Our Scientific Advisory Committee of leading scientists and clinicians draws on their own experiences in biomedical discovery. With leadership from Rita Allen Foundation Medical Advisor Kathleen Foley, they look for qualities that go beyond bold biomedical questions and approaches—including potential for learning, collaboration and leadership.

We are continually inspired by the passion Rita Allen Foundation Scholars have for exploring complex questions at the forefront of their fields. We are eagerly anticipating our 40th anniversary plenary meeting of Rita Allen Foundation Scholars this summer in Palo Alto, California, where, after much planning, we will be gathering as a community to celebrate discovery research for the benefit of humanity.

As we look to the future, we can only begin to imagine how Rita Allen Foundation Scholars will use their instincts of leadership and creativity to reshape their fields and richly contribute to society.

Back in the 1970s, the Rita Allen Foundation Scholars program was itself shaped by an inspiring scientist and leader, the molecular biologist and public health pioneer Howard Hiatt. I had the pleasure of speaking with Dr. Hiatt recently about the early days of the program and the role of science in society. To address the complex challenges of our time, we will need a greater understanding of science and greater engagement of scientists in civic affairs.

“It’s all linked together,” Dr. Hiatt said. “I can’t say enough about the importance of the Rita Allen Foundation in making possible not only the development of young scientists but of young leaders.”