Adrian Salic spent many hours of his childhood tinkering with a microscope alongside his grandfather, a retired physician. He recalls sifting through a collection of old histology slides, gazing at the varied structures of healthy and diseased human tissues. 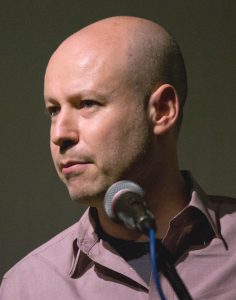 He still marvels at the architecture of life, as he seeks to understand molecular events that direct cells to form appropriate tissues and organs within a developing animal. Salic’s research focuses on the signaling activities of a protein called Hedgehog, named for the stubby, hairy fruit fly larvae that result when such signaling goes awry.

Many features of the Hedgehog pathway are conserved throughout the animal kingdom. “If something goes wrong with the Hedgehog pathway—for example, if there is too little of it during embryonic development—you can end up with birth defects,” Salic explains. “Or if there’s too much activity in this pathway later in life, you can get various cancers.”

Salic studied preclinical sciences in his native Romania before pursuing a Ph.D. at Harvard Medical School, where he gained his first true research experience. “I guess I proved that it’s never too late,” he says, adding that he benefited from the mentorship of a patient and experienced postdoc in Marc Kirschner’s lab. Salic examined critical events in early embryonic development, and devised a new method for dissecting a key developmental pathway using frog egg extracts.

He remained at Harvard for a postdoctoral fellowship in Timothy Mitchison’s lab, where he identified an essential factor for proper cell division in vertebrate animals. This work helped to illuminate how pairs of chromosomes stick together, and then separate, ensuring that both “daughter” cells end up with the same genetic material.

“I think you cannot force these things. The best you can do is nurture the process of discovery. If you look at how scientific discoveries are made, they’re clear only in hindsight.”

When he joined the Harvard Medical School faculty as an assistant professor of cell biology, Salic chose not to take the common path of building on his postdoctoral work. “I wanted to go back to an earlier interest I had in cell signaling, and start off in a new direction,” he says. “Of course, when you do something like this, you don’t have a track record in that area, so it’s very hard to obtain funding” from federal entities such as the National Institutes of Health. Receiving the Rita Allen Foundation award in 2006, Salic says, was crucial for him to begin delving deeply into the mechanisms of Hedgehog signaling.

Salic and his research group investigated how the Hedgehog protein and its signaling partners come together at a cell’s primary cilium, a small, hair-like projection found on most vertebrate cells. They determined how a cell processes the Hedgehog protein into an active form capable of stimulating changes in neighboring and distant cells to coordinate development. Recent work in Salic’s lab has further elucidated the molecular structures and events of Hedgehog signaling, and has helped explain how mutations in the pathway’s genes can lead to brain malformations and cancers.

Here, Salic shares the questions that will drive his next experiments, his views on funding scientific research, and some of his most memorable reads.

I think we’ve made significant contributions to understanding how cells send and interpret signals in the Hedgehog pathway. We’re trying to figure out, on a molecular level, exactly how this communication between cells happens. Although we know the genes that are critical for transmitting and interpreting signals, at the level of the proteins themselves we still don’t know how this whole process takes place. I see my job as trying to understand how exactly this chain of events unfolds, so that we can perhaps intervene when something goes wrong, and try to fix it.

There are still a lot of open questions that we’d like to contribute to answering, so I hope this will remain our bread and butter for the near future. But at the same time, we’re trying to branch out a little bit, because there are definitely other cell–cell communication systems that are less well understood and open for investigation, such as signaling pathways that control cell and tissue size.

I also really enjoy developing new chemical technologies for biology. We’ve done some work on making various probes that allow [researchers] to visualize the synthesis of fundamental biological components, such as DNA, RNA, proteins or lipids. I think it’s nice to develop these tools and apply them to our own research, but at the same time I’m very happy that many labs use these tools, some of which are commercially available.

In your view, what is the meaning and value of basic research—and what are the implications for the broader scientific enterprise?

I think the most important thing to fund is basic science—what I call hypothesis-driven science. This is science where you’re discovering how things work. All the major scientific discoveries in the past were made by small groups of creative and dedicated people who started with a biological question in mind, and then worked to figure it out.

Of course, there are lots of new technologies and new applications, including treatments, which have come out of this basic science work. Now, not only is the funding tight, but a lot of funds go to support what I would call factory science—the big, monster efforts to describe and catalog and compile data without any clear goal or hypothesis in mind. I think this is not a productive direction.

The main problem I see is this movement of funds away from basic science, putting more emphasis on big science—massive data collection—and also on translational science. I think you cannot force these things. The best you can do is nurture the process of discovery. If you look at how scientific discoveries are made, they’re clear only in hindsight. They’re unpredictable, but you can be sure that if you fund the right people and let them follow their intuition, they’ll make discoveries, and there will be translational applications.

Besides your time looking under the microscope, what else inspired your scientific interests?

In high school, I randomly picked up a chemistry textbook that I started reading, because what we were learning in school was not that interesting. When I had to stay home for a couple of weeks because I was sick, I remember being bored and finishing this chemistry textbook. By the time I went back to school, I knew it very well.

A couple of popular science books also had a strong influence on me early on. One was a little book from the ’40s by the physicist Erwin Schrödinger, called What is Life?—a book that had a strong influence on many biologists. I also read a book called Chance and Necessity by a French biologist named Jacques Monod—I’m sure if I were to read it now I would find it dated, but at the time it had a strong impact on me. Both books dealt with how organisms obey the laws of physics and chemistry, yet they have unique properties that aren’t found in the inanimate world. I guess all of us biologists are ultimately working on figuring out what it means that an organism is alive.