Biochemist Peter Kim has explored how the twists, turns and movements of molecules conspire to produce stunning biological effects. He has also made some radical shifts in his own career, including shutting down his lab for 12 years to serve as a pharmaceutical executive. Now, Kim says, he’s “having a blast” returning to basic research as a faculty member at Stanford University School of Medicine. 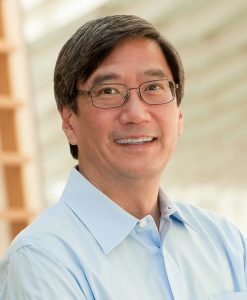 His enduring research focus is viral membrane fusion, a mechanism that allows pathogens such as influenza and HIV to enter and infect host cells. Kim’s lab is building on his foundational work to guide approaches to therapies and vaccines. He is a fellow of Stanford’s ChEM-H institute, which unites chemistry, engineering and medicine to advance human health; and he serves as the lead investigator for the Infectious Disease Initiative of the Chan Zuckerberg Biohub.

Kim first “got bit by the research bug” as an undergraduate at Cornell University, working with George Hess to investigate how electric eels generate current to immobilize their prey. He then pursued an M.D.-Ph.D. at Stanford, where he delved into fundamental questions of protein folding—how a long chain of amino acid “building blocks” forms a molecule of a particular shape, exquisitely adapted to break down sugars, bind to DNA, or carry out some other essential cellular function.

Kim says he was fortunate to find a graduate mentor in Robert (“Buzz”) Baldwin: “Buzz was a real scholar. He was always available to talk, but he was pretty hands-off—a lot was left up to me to decide. And [Stanford’s] biochemistry department at that time was a spectacular department. People were very collaborative and the students interacted a lot, so it was a great atmosphere for growing up and learning to do science.”

Enthralled by research, Kim chose not to complete his medical degree: “I took my Ph.D. and I ran,” he says. As a Whitehead Fellow at the Massachusetts Institute of Technology, he was given freedom to establish an independent research program, and explored new approaches for detecting the unstable structures that form during protein folding. Kim became a faculty member at MIT in 1988, and was selected as a Rita Allen Foundation Scholar in 1990.

“Being surrounded by the engineers and the computer scientists here at Stanford has had a significant impact on how I’m thinking about the future of science.”

Early studies in his laboratory examined a protein structure called a “leucine zipper,” named for its periodic repeats of the amino acid leucine, and known to be important for binding to DNA—including by some oncoproteins, regulators of cell growth and differentiation that can contribute to cancer. A crystal structure showed that the “zipper” was in fact a coiled coil, a common protein motif consisting of two helices that wrap around each other, first described by Francis Crick in 1953 but not visualized at high resolution until nearly four decades later.

This worked paved the way for further analysis of the oncoproteins Fos and Jun, and also led Kim’s group to begin investigating viral membrane fusion. They discovered what Kim calls a “massive conformational change” by the hemagglutinin protein of the influenza virus, which adopts a coiled coil structure that allows it to span the membranes of the virus and its host cell. Further research by Kim and his colleagues revealed similar structures in the envelope proteins of HIV and Ebola virus. “In all of these different viruses there’s a protein that’s poised, ready to spring,” he explains. “When it encounters receptors at the right place and the right time, it does spring and becomes a membrane protein in two different membranes, and then it snaps back to bring the two membranes together—that’s called fusion.” 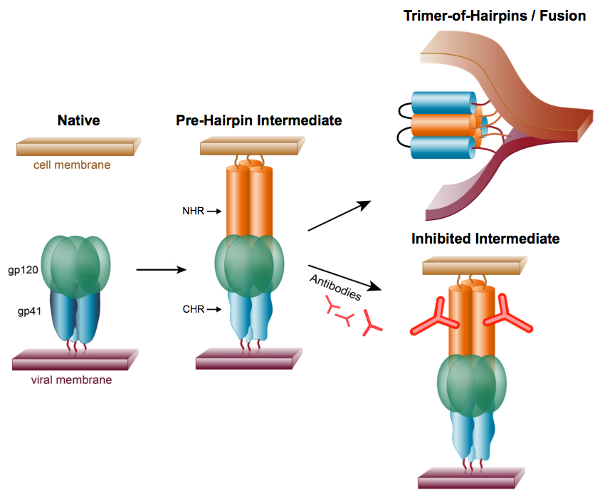 Rita Allen Foundation Scholar Peter Kim has studied how an envelope protein of HIV (gp120/gp41) functions to fuse the viral membrane with the host cell membrane via a “spring-loaded mechanism.” His research group is exploring how strategies to elicit antibodies against an intermediate form of the envelope protein might be used to develop an HIV vaccine.
(Image: Eckert et al. [1999] Cell, http://peterkimlab.stanford.edu)

His more recent studies have focused on strategies to inhibit membrane fusion as an approach to developing an HIV vaccine. Here, Kim reflects on the challenges of translating basic knowledge into an effective vaccine, his experiences at the helm of drug development efforts, and the “multilingual” future of biomedicine.

How has your work informed research on the treatment and prevention of HIV?

After our discovery, another group came up with a peptide that binds to this intermediate [form of the viral envelope protein] and prevents the snap back, and actually prevents HIV infection. That peptide became an approved drug for treatment of HIV. It’s not a very widely used drug because it’s an injectable and there are very good oral drugs. But for patients who have developed resistance to the more convenient drugs, this is the drug of last resort.

For many years the dream has been to figure out how to get the body to produce antibodies that bind to this intermediate, and thereby prevent membrane fusion and HIV infection. Ideally, one would do this by immunizing people with something that will lead to these sorts of antibodies. Unfortunately, this has proven to be much harder than we had imagined. We do have antibodies, and we’ve shown that they inhibit HIV infection by binding to this intermediate, but it has not been possible to figure out how to elicit potent antibodies.

The reason we’re interested in this approach is that the part of the protein we’re targeting is highly conserved across thousands of HIV strains. A big problem with antibodies against HIV is that the virus mutates so rapidly that it can escape, and we think that by targeting this highly conserved region it’s going to be harder for the virus to escape. The tricky part is that this part of the protein is only exposed transiently during infection, which makes it harder. But I think it’s worth trying.

You’ve taken some unexpected turns during your career, including a leadership position at Merck. How did that come about, and how was it different from your academic work?

I like to think that the research we’re doing might someday be helpful to improve human health. That’s always been an interest of mine, and I did consult for biotech when I was at MIT and certainly enjoyed it. In 2001 Ed Scolnick, who was the head of research and development at Merck, asked me whether I’d be interested in moving to Merck and taking over when he retired. I jumped at that opportunity.

I got to work with some tremendous, dedicated people from all different areas of science, engineering and medicine—because no one person can know anywhere close to what you need to know to get a drug or vaccine across the finish line. You have to work in teams and you have to work with experts—in biostatistics, manufacturing, safety and toxicology, clinical research, chemistry…

We had some wonderful successes, including Gardasil, the cervical cancer-preventing vaccine; Januvia for Type 2 diabetes; and Isentress, the first integrase inhibitor for HIV. We also had some very visible failures. Wall Street is not happy when you fail. So I got a flavor for that end of things as well, but all in all I had a wonderful time.

What new directions in biomedical research are most exciting to you?

I am really struck by what’s going on at the interfaces with engineering and computer science. I’m part of a new institute at Stanford called ChEM-H, where we’re interested in bringing people together from different areas and training students to be multilingual—not just a specialist in one specific area, the way we were all brought up, because we think that’s going to be so important for how problems are addressed in the future.

Being surrounded by the engineers and the computer scientists here at Stanford has had a significant impact on how I’m thinking about the future of science. The engineers like to solve problems; they like to come up with new technologies. And if that’s done in close proximity to scientists or physicians who understand what it is that they want or need, you can stimulate things to move faster.

One area that’s quite stunning is machine learning. It’s not just about driving cars. People are developing ways for people who are paralyzed to type by moving their eyes. People are predicting where the next seizure is going to occur in the brain based on studies of prior seizures and machine learning. The impact of this on medicine, and on science, including my own field of protein-protein interactions, is pretty amazing.