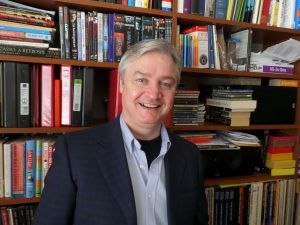 Vince Stehle began his career in philanthropy as a reporter for The Chronicle of Philanthropy, and later helped to develop new programs at foundations seeking to strengthen communities and public-interest media. Since 2011, he has directed Media Impact Funders, where he has been instrumental in building a network of funders who view communications as a vital part of working toward positive changes in society.

With a recent grant from the Rita Allen Foundation, Media Impact Funders has launched a multiyear initiative to develop resources and connections to help funders effectively support productive public engagement with science and evidence.

I recently spoke with Vince about how funders are thinking about our rapidly evolving media ecosystem, and what they can do to support public engagement with quality news and evidence.

As you think about the future of media, what are some of the key themes that stand out for you?

The overarching theme that we’re hearing in every meeting and in every conversation is, “now more than ever.” It’s a phrase that seems to be etched into the moment that we’re in, and it applies to media, journalism, investigative reporting, defense of the First Amendment, defense of the idea that facts matter—and the whole foundation of our civilization. Evidence and rational argument should be the foundation of how we govern ourselves and how we conduct our affairs. All of these things are, in some way or another, being challenged.

“Media has been used to stir up fear, hatred and division in our society, but…media and technology, together, can be used to create positive change and reassert the value of rational deliberation, tolerance and an inclusive society.”

It’s a challenge, for our organization, and for philanthropy as a whole, to suddenly think about how we conduct our affairs in ways that strengthen the power of argument, of storytelling, of making the case for why we think that our ideas matter.

How are you thinking about sorting out priorities and collaborative work?

Strong networks are the foundation of our growing work. The larger philanthropic community is becoming aware of some of these issues rather suddenly—they are recognizing that there is a network of key players who have been thinking about these issues all along. For example, the freedom of expression work at the Ford Foundation; the concern about journalism and the broader concern for the First Amendment at the Knight Foundation; the importance of media and journalism across a broad range of topics for foundations like the MacArthur Foundation; and issue-focused organizations, like the California Endowment, using media as a core strategy for their efforts to create a healthy California. Others in philanthropy are, I think, waking up to the challenges and opportunities, and they’re looking to the existing network that has experience in creating programs and seeking dialogue about how to do this work effectively.

When you think about the future of media, do you see bright spots?

Earlier this year I went to a conference on the future of media in Palo Alto, the intellectual capital of new technology. The room was full of people concerned about the way media has been used to stir up fear, hatred and division in our society, but there was also recognition that media and technology, together, can be used to create positive change and reassert the value of rational deliberation, tolerance and an inclusive society.

There were interesting examples where they showed that the distributed nature of media technology can engage a broader community to report facts that create a more complete picture of a particular problem or solution. A new kind of artificial intelligence and other algorithms can also strengthen the quality of content and defend against false information. They can serve as a defense in the larger media ecosystem from that information undermining the public debate.

I think it’s important to underscore the point Steve Waldman is making, which is that some of these services and companies in Silicon Valley are undermining the health of the media ecosystem simply by virtue of market dynamics. They are within their rights as businesses to operate in the interest of achieving profits. They are, nevertheless, undermining the ability of news and information companies to survive.

It’s a strong argument that more of these wealthy internet entrepreneurs should be thinking of ways they can contribute to a media ecosystem that serves the information needs of communities, and not just their bottom line. It’s a huge opportunity for technology companies, and the entrepreneurs and investors who have profited from that enormous boom, to think about the kind of contributions they could be making to media and journalism organizations.

With a key emphasis on the public interest, where does public media fit into this now?

Public media remains an extremely important and influential news provider. Sometimes in media philanthropy we break things down into journalism over here, culture over there, education in a different place. These different categories are thought of as different boxes with different funders who care about them. Public media is able to feed the information needs of the individual as a more holistic consumer.

We all have a need for journalism, for basic information about the traffic and the weather and the mayor, and making sure we understand what is going on in our world as it relates to news. But we are also complex individuals with cultural needs and interests. Public media continues to be able to serve the whole person as they grow from youth to adulthood and beyond. The educational component is also extremely important there.

One aspect of your work that we’re excited about is what you might do to strengthen productive public engagement with evidence and science. What opportunities do you see to help funders apply research about how to communicate about evidence and connect with audiences more fully?

A much broader group in philanthropy is paying attention to these issues, in a different way than they have been in recent years. There is such an intense debate happening now about the fundamental value of facts and the ability to discern agreed-upon facts, particularly when it comes to science. So it’s an extremely rich moment to be starting this work.

Whether they are concerned about health, or climate change and other environmental issues, or the importance of science as a whole field—more and more foundations are recognizing that we need to do a better job of communicating around science, and also understanding the dynamics and the science behind communications.

“Those of us who invest in a better world need to have better information to conduct that work. So the case for media and journalism, across the board in philanthropy, suddenly becomes much stronger.”

There are funders who support media, who are recognizing that an increasingly important aspect of media is how we tell the stories that make the case for evidence-based inquiry—not just delivering information through charts and graphs and clear, rational configurations. There’s a growing understanding that different people process information in different ways.

There is also a significant group of science funders, groups like the Science Philanthropy Alliance, with extraordinary resources that have been focused on scientific research. I think there’s a growing recognition among science funders that they need to compete in the marketplace of ideas and do a better job of conveying crucial information that isn’t prevailing in public discourse.

We are also seeing philanthropies stepping up to say that they haven’t focused on media and journalism until now. It’s extremely important—when civil society is facing so many challenges—that we speak out, and speak out as effectively as possible. That gets back to our fundamental work at Media Impact Funders.

How are you thinking about various challenges and opportunities for Media Impact Funders?

Zia Khan, a vice president at the Rockefeller Foundation, has talked about support for journalism not as a way of communicating what the foundation knows, but rather as a way of investing in information that helps them understand the world better—a way of learning what’s actually happening, not just as a way to make a stronger case for what they already believe. I think that’s an important principle for philanthropy to understand.

We hope that philanthropy is waking up to the very vital importance of journalism and media to contribute to an evidence-based understanding of the world that we’re in. Those of us who invest in a better world need to have better information to conduct that work. So the case for media and journalism, across the board in philanthropy, suddenly becomes much stronger.

Is there a piece of media imprinted on your mind and heart that you wish all of us who care about these topics would read or watch?

People have taken public media for granted. Public radio, public television—millions of people rely on it, and they think it’s like running water. They open the tap, and there it is. As we’re hearing that some in Washington would like to eliminate funding for the Corporation for Public Broadcasting, we’re reminded that it was 50 years ago when the Public Broadcasting Act was signed.

Lyndon Johnson’s remarks at the signing ring true today. They were rather more prophetic than we might imagine. He talked about not just a radio or television broadcast, but a service that combined all of the different ways to communicate through electronic communications. It was a statement of service to all of society—to the cultural education and information needs of the broader community. We should go back and listen again, and make sure we don’t lose something really vital in our society.