Alejandro Sweet-Cordero’s journey into research and medicine began during his high school years in Mexico City, where he volunteered as a paramedic, providing medical aid to people injured in car crashes and other emergencies. Sweet-Cordero’s volunteer work, combined with a scholarly interest in biology (and science in general), led him to Stanford University for his undergraduate studies, from which he intended to go on to medical school. At Stanford, Sweet-Cordero was first introduced to the world of bench research.

He explains, “At Stanford I had the opportunity to develop my interest in research and work in a laboratory studying the neurobiology of behavior, which was my first kind of research experience as an undergrad.” 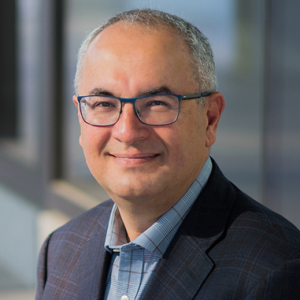 After completing his undergraduate studies, Sweet-Cordero went on to the University of California, San Francisco, to attend medical school. As a first-year medical student, he had the opportunity to place out of the required biochemistry course and take an elective instead.

“One of the electives that was offered was The Molecular Biology of Cancer, which was a course that was team-taught by Harold Varmus and Michael Bishop, who were Nobel laureates, as well as several other luminaries in molecular biology like Bruce Alberts and Doug Hanahan. That was a wonderful opportunity to interact face-to-face with some world-renowned scientists, and that piqued my interest in cancer research and cancer biology,” he remembers.

Sweet-Cordero took this interest into account when applying for a pediatric residency at UCSF.  During residency, Sweet-Cordero greatly enjoyed taking care of children with cancer and decided to pursue further training in oncology. He then went on to do fellowship training in pediatric oncology at the Dana-Farber Cancer Institute/Boston Children’s Hospital.  During his time in Boston, he also had the opportunity to work with Tyler Jacks at the Massachusetts Institute of Technology. Sweet-Cordero credits the amazing research environment in the Jacks lab and the mentoring he received with launching his scientific career.

“Even though I spend most of my time on research, my motivation has always been focused around disease and doing something about disease,” says Sweet-Cordero. “And I liked pediatrics for a couple of reasons. One, I felt like in pediatrics you had the opportunity to really help patients, because—for the most part—they were in good shape, but they just had one specific problem and needed help with that problem. The other thing about pediatrics is you really get wonderful exposure to the development of humans—a two-day-old human is different from a three-month-old human, who is different from a 10-year-old human. That also impacts the diseases you would see.”

Rita Allen Scholar Alejandro Sweet-Cordero and his team use genomic analysis to understand the mechanisms of cancers such as osteosarcomas. The Sweet-Cordero lab is interested in identifying genomic abnormalities—such as somatic copy number alterations, in which repeated nucleotide sequences are gained or lost—across osteosarcoma tumor samples. Determining critical genes associated with gains (top, yellow) or losses (bottom, blue) that lead to cancer progression as well as the prevalence of these copy number alterations amongst cancer patients (y-axis) can help in designing future genome-informed treatments for cancers. (Image: Sayles et. al [2018] Cancer Discovery)

In pediatric oncology, Sweet-Cordero found a way work with patients directly, using a holistic approach to patient care. “As an oncologist, you’re kind of the primary-care doctor for a patient with a life-threatening disease,” he says. “You get to worry about not just one organ, or one part of the patient, but the whole person.”

He continues, “Cancer is a molecular disease. We’re dealing with patients and their life-altering situation, but also thinking about the science behind it and how we actually make improvements in the way we treat disease, how we understand how cancer works, and why it’s so life-threatening. All of that really came together in a great way for me through pediatric oncology.”

After completing his fellowship, Sweet-Cordero took a position as a Clinical Instructor in Pediatric Hematology and Oncology at the Dana-Farber Cancer Institute for three years before he was hired as an assistant professor at Stanford in 2005. Three years later, Sweet-Cordero was selected as a Rita Allen Foundation Scholar. In 2016, he was recruited back to UCSF where he now holds the Benioff Endowed Professorship in Children’s Health and directs the UCSF Molecular Oncology Initiative as well as running his own laboratory.

Since receiving the award, Sweet-Cordero has expanded on his initial research project—studying the role of a gene called WT1 in cancers driven by the KRAS mutation—to include work to elucidate how the oncogene KRAS drives lung cancer and to study molecular drivers in pediatric sarcomas.

“Cancer is a molecular disease. We’re dealing with patients and their life-altering situation but also thinking about the science behind it and how we actually make improvements in the way we treat disease, how we understand how cancer works, and why it’s so life-threatening.”

Here Sweet-Cordero reflects on his career, the influence of the Rita Allen award, and the future of personalized medicine.

How and when did you start working on the non-small-cell lung cancer and sarcoma research?

I started that work when I was a postdoc with Tyler Jacks. But before that, I was a resident here at UCSF, and I was looking around for my next move. I happened to hear a talk from Tyler, who at the time was pioneering the use of genetically engineered mice to study cancer. I was just really amazed at this idea that you could take a small animal and genetically modify it to study cancer, as opposed to studying cancer in a dish. That motivated me to apply to Tyler’s lab to do my postdoc. And at the time I joined his lab, one of the models that he had developed was the non-small-cell lung cancer model, which was a way to activate KRAS, an oncogene.

Because I’m a pediatric oncologist, I have an interest in sarcomas, mostly. I actually don’t take care of lung cancer patients clinically, but I do take care of sarcoma patients. It has always been an interest of mine to understand why patients get sarcomas and why they’re difficult to treat with chemotherapy and how we can find better, targeted approaches. We work primarily on two types of sarcomas that are commonly seen in children and young adults; one is called Ewing’s sarcoma, and the other one is called osteosarcoma.

Currently, we do a broad spectrum of research from things that are pretty basic—understanding the molecular mechanisms of signaling—to developing new combination therapies for patients with either lung cancer, or sarcomas.

Where do you see personalized or precision medicine going in terms of the future of cancer treatments?

I think that precision medicine is definitely going to continue to evolve and is going to be something that’s more and more used to guide therapy. There are a lot of challenges in being able to implement it. Probably the biggest challenge is that we’re used to thinking about testing drugs in large groups of patients, with all of them having the same disease. A lot of the way that we design clinical trials is focused on that same idea. So if you have, say, 100 patients or 200 patients with lung cancer or with a sarcoma, you treat them with a drug and you see if you can get a consistent response to treatment.

Precision medicine kind of turns that on its head, because instead of trying to put everybody within a certain disease into a certain clinical trial, you’re operating on this idea that every patient is different and therefore they need some kind of a tailored therapy specifically designed to their tumor. So that’s one of the things that we are struggling with.

Another thing we are struggling with is how do you actually implement precision medicine in a way that is rigorous? How do you measure that it’s actually working? That’s the other challenge, just finding what works. But I’m optimistic. I think that those things are solvable problems, and they just require a lot of hard work and collaboration.

How did becoming a Rita Allen Foundation Scholar influence your career?

It gave my lab the initial funding to pursue our research, which a couple of years later we were able to expand into an R01 grant. Right after the financial crash there was stimulus money put into the National Institutes of Health to stimulate the economy; and we got one of those funded R01s, which was a direct offshoot of the work we had funded with the Rita Allen Scholar award. We’ve had that grant for a total of seven years now. The support that I got from Rita Allen was important in the critical years of funding when you’re struggling to get things off the ground.

Would you like to share some things you enjoy doing when you’re not in the lab and have a little bit of downtime?

I’m a frustrated classical guitarist, and I like to read novels as well as spend time with family and friends.

Is there anything that you’ve read recently that you enjoy?

I’m a big fan of Haruki Murakami and I just read a book of his called 1Q84.