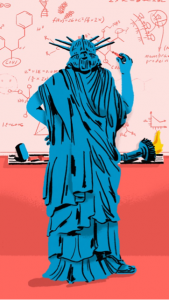 The Aspen Institute’s Science and Society Program, in collaboration with GOOD Worldwide and LeapsMag recently released a digital magazine, The Future of Science in America: The Election Issue, which explores the intersections between science, politics, policy and the election through diverse perspectives, including articles and comments from members of the Rita Allen network. The Future of Science in America is supported by the Gordon and Betty Moore Foundation and the Rita Allen Foundation.

In this issue: 94 percent of Democrats and 93 percent of Republicans agree that it is important for the United States to be a global leader in scientific research, according to a new national survey by Research!America showing widespread support for science across party lines.

“The U.S. scientific community can make the world a better place, but not alone. We will need to listen to communities across the U.S. to know where knowledge and solutions are needed; carefully and clearly convey facts and consequences in areas where we know; debate and unashamedly convey uncertainties and areas where we don’t know; continue to engage with other scientists here and elsewhere to develop new approaches and understanding; train a new generation of scientists to address current and future challenges.”

—Andrew Z. Fire, 1989 Rita Allen Scholar and 2006 Nobel Laureate in Physiology or Medicine, on advice for the incoming administration to prioritize science

“Adults have news programs and documentaries and educational YouTube channels, but no Sesame Street. So why don’t we?”
—WGBH Civic Science Fellow Adnaan Wasey on exploring the idea of using television to make science engaging and accessible to adults

“In addition to credibility, we’ve learned that potential collaborators also care about whether others will be responsive to their goals and constraints, understand their point of view, and will be enjoyable to interact with.”
—Adam Seth Levine of Research4Impact on the science of collaboration and why diverse individuals choose to work together

“I do believe in the promise of what the future can hold for us in terms of both science and tradition. The two can complement each other and are not at odds, even though we tend to think of sustainability in scientific terms. And yes, science can help us achieve sustainability through things like solar tech, health innovations, and natural sciences. But I’m talking about sustainability overall and of the Earth: sustainability of water, energy, and agriculture, but also of human capacity and Navajo culture.”
—Nonabah Lane of Navajo Power-New Mexico and Navajo Ethno-Agriculture on efforts to balance Indigenous knowledge with science and technology