Bruce Stillman counts himself lucky to have been born in 1953, the year James Watson and Francis Crick announced their discovery of the double helix structure of DNA, and to have embarked on his research career during the early days of recombinant DNA technology. “It was almost perfect timing…in terms of being involved in the field of molecular biology, which has revolutionized many areas of science,” he says.

As an undergraduate at the University of Sydney, Stillman conducted thesis research on bacterial genetics in Keith Brown’s lab, where he worked to dissect the regulation of amino acid synthesis in E. coli. During that year Brown was on a sabbatical at Stanford University, and wrote effusive letters to Stillman about the exciting possibilities of recombinant DNA research and the study of DNA tumor viruses.

“I looked around Australia for any labs that worked on DNA tumor viruses,” Stillman recalls. “There was only one, in Canberra, and they worked on adenovirus.” So that’s where he began his Ph.D. work with Alan Bellett at Australian National University’s John Curtin School of Medical Research. Stillman investigated DNA replication of adenovirus, which is not known to cause cancer in humans, but served as an important model system, and is capable of interfering with cell cycle regulation in a manner similar to cancer-causing viruses. He and Bellett studied an unusual virus-encoded protein and its role in initiating DNA replication.

At that time, Stillman says, he was eager to shift his focus to research that would advance understanding of cancer. Both adenovirus and simian virus 40 (SV40), the main models for DNA tumor viruses, were known to infect cells and stimulate cellular DNA synthesis, a process driven by the cancer-causing proteins that the viruses produced. “Nothing was really known about cellular DNA synthesis in the late ’70s, so I decided I was going to try to figure it out,” he says.

He knew that Cold Spring Harbor Laboratory was one of the top places for tumor virus research, and in 1979 he began a postdoctoral fellowship there, working in a laboratory headed by Michael Mathews (now at Rutgers New Jersey Medical School). But unusually, he was allowed to continue to focus on adenovirus DNA replication, and in 1982 published work identifying a rather unique DNA polymerase that initiates virus DNA replication using a protein as a primer.

Stillman soon became a staff investigator at Cold Spring Harbor, continuing his own research program on DNA replication, and in 1983 he was selected as a Rita Allen Foundation Scholar. The award enabled him to take his research in new directions. He chose to begin working with SV40, whose replication was more similar to that of cellular chromosomes, making it a more useful model than adenovirus for identifying cellular proteins that participate in DNA replication. Following up on work from Thomas Kelly’s lab, Stillman and his team started isolating these cellular proteins using in vitro techniques. He also developed a system to examine the deposition onto the replicating DNA of histones—the proteins that form the “spools” around which strands of DNA are wound in eukaryotic chromosomes. Knowledge of the histone deposition process has had “an impact on [understanding] the inheritance of epigenetic states of gene expression,” he says.

“[The Rita Allen Foundation award] was the first independent money that I had, and it enabled me to think about exactly what I wanted to do in the longer term.”

Around the same time, Stillman’s group also set out to study DNA replication in yeast. These investigations culminated in the identification, in 1992, of the multiprotein complex that binds to origins of DNA replication, the sequences on chromosomal DNA where DNA duplication begins. “It’s an ATP machine that starts the entire process of chromosome replication,” Stillman says. (The lead author on this work was a postdoc, Stephen Bell, a 1995 Rita Allen Foundation Scholar who is now a professor of biology at MIT.) 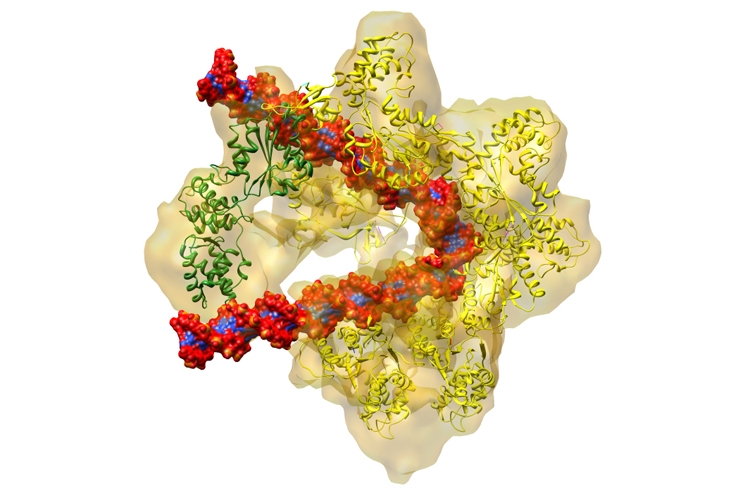 Rita Allen Foundation Scholar Bruce Stillman has characterized the origin recognition complex, a group of six proteins (shown in yellow in this illustration) that binds to origin of replication sequences on chromosomal DNA (red and blue). The recruitment of the
Cdc6 protein (green) also prepares the DNA for unwinding and subsequent replication—an essential process for cell division.
(Image: Brookhaven National Laboratory)

Stillman’s lab went on to reconstitute both SV40 and the initiation of yeast chromosome replication in vitro. “The combined investigations of these two systems led to the discovery of lots of cellular DNA replication proteins,” he says. “Now we know in great detail the mechanisms of how the proteins involved in DNA replication are controlled by the cell division cycle regulatory machinery, a machinery identified by others. The integration of cell cycle regulation and DNA replication is giving us a profound understanding of how these processes are controlled in normal cells and how they go wrong in cancer cells, which was an original goal.”

Along with making fundamental contributions to understanding DNA replication, Stillman has served in various leadership positions at Cold Spring Harbor for more than 25 years; he has been President of the Laboratory since 2003. Here, Stillman reflects on the significance of the Rita Allen Foundation award, and discusses Cold Spring Harbor’s changing roles in translational research and science education.

How did becoming a Rita Allen Foundation Scholar influence your research?

It was the first independent money that I had, and it enabled me to think about exactly what I wanted to do in the longer term. I started to look around at what was going to be important, and two things came to the fore. One was the SV40 virus, because that virus replicates like the cell chromosome. It was a great system to figure out how the DNA replication fork proteins work, because all of the proteins that replicate SV40, except one, are cell proteins. We identified and purified all of those cell proteins and figured out how they worked. Almost all of them were previously unidentified proteins, and turned out to be very important proteins also involved in DNA repair and DNA recombination, in addition to cell DNA replication.

I also used the award to think about working on cell chromosome replication itself, and was able to recruit additional people to the laboratory. One of them was John Diffley, who originally came to work on adenovirus, but he and I discussed the possibility of working on yeast. That had an enormous impact on the entire field of replication, because John started doing this in my lab. He’s now a major player in the field, as are many other former postdocs. We were working on SV40 and yeast in parallel, and that turned out to be incredibly powerful. Now we work on yeast and human cells in parallel to do comparative chromosomal replication.

As the leader of a basic research institution, how do you think about balancing support for basic versus translational research?

Our faculty members are coming to me all the time, saying, “Look, I’ve been working on this discovery, and if I had some extra money, we could do added value research, which would potentially be applicable in health care and the development of therapeutics.” I see the mission of Cold Spring Harbor as performing important basic research, discovering new processes and developing new ideas, but translational research is not something that we should ignore. It is a fine balance of allocation of resources.

One of the biggest new drugs approved for breast cancer [treatment] is from Pfizer—the cyclin-dependent kinase 4 (CDK4) inhibitor palbociclib. The target for this drug was discovered at Cold Spring Harbor by David Beach, and also by Chuck Sherr at St. Jude Children’s Research Hospital, in 1994, but this important drug just got approved in 2015. That timeline is way too long, and I think institutions have a responsibility to accelerate the rate of discovery.

But we also have to understand that we can’t all become pharmaceutical companies; there has to be a very good working relationship between the two, and also with health systems. Last year we signed an agreement with one of the largest health systems in the United States, Northwell Health, which has transformed our ability to integrate the pinnacle of science with clinical cancer research, without taking resources away from basic science.

How does Cold Spring Harbor make an impact on science beyond the research of its faculty?

We have about 9,000 people a year come here for scientific meetings and courses. That’s one of the reasons why I’ve stayed at Cold Spring Harbor—the world’s scientists come here, so you get to meet a lot of people—that networking is very important.

We also have a DNA Learning Center that I’m very proud of. This program teaches laboratory-based science to more than 30,000 middle and high school students a year just on Long Island, either in our center or at their schools. We have also helped start DNA Learning Centers throughout the United States and around the world—we have just opened a very large center in China. We think about such teaching as a generational thing: if you start engaging kids in scientific methods early on, then they’ll grow up thinking like that.