A salute to the leadership, passion and discoveries of pioneering Rita Allen Foundation Scholars 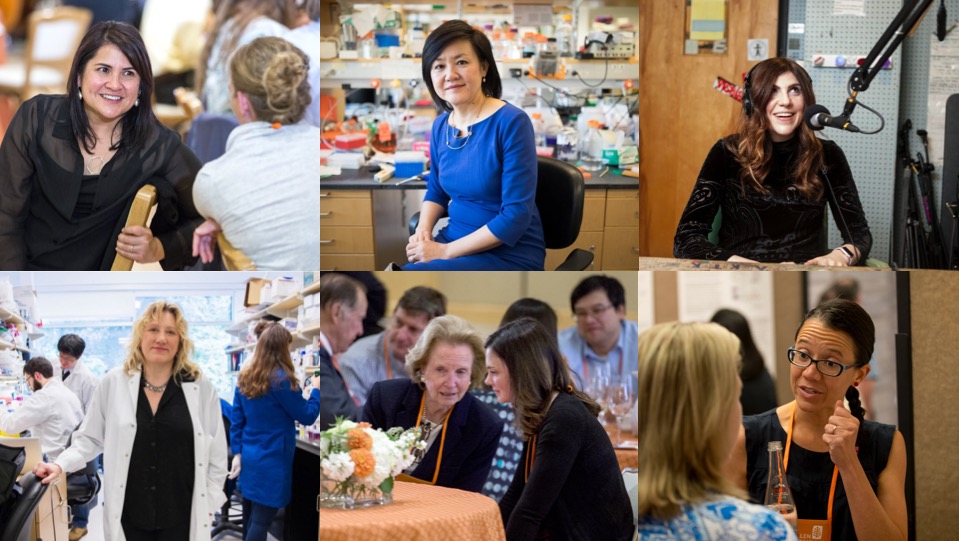 As we mark the 32nd annual Women’s History Month in the United States, the Rita Allen Foundation honors the vital contributions of women in science. We celebrate the increasing numbers of women in faculty positions and leadership roles, while recognizing that there is much work still to be done.

We commend all those who continue to break down barriers, expand opportunities and strengthen communities of women in science, including such organizations as the Association for Women in Science. In an interview with the association’s New Jersey chapter, Rita Allen Foundation President and Chief Executive Officer Elizabeth Christopherson shared a key lesson she has learned from women leaders: “We realize that true leadership is about building agency among others and bringing many diverse voices to the decision table. Change begins with building relationships and a shared vision built on shared values—and it requires time and hard work by many.”

In this spirit, we recently welcomed our two newest Award in Pain Scholars, Helen Lai and Candice Paulsen, who join an extraordinary community of Rita Allen Scholars. We are also pleased to share profiles of nine inspiring women scientists who have helped to transform our understanding of pain relief, neural circuits, cancer dynamics, chromosome biology and more. Some have led scientific societies, departments or initiatives; all have served as mentors and champions for new generations of scientists. These are just a few of the trailblazing researchers the Foundation has supported, and we look forward to capturing more Scholars’ stories in the coming years.

“True leadership is about building agency among others and bringing many diverse voices to the decision table.” —Elizabeth Good Christopherson

Kathleen Foley (1978), a member of the second class of Rita Allen Foundation Scholars, is recognized as a leader in developing global standards for pain management and palliative care. As the Foundation’s Medical Adviser, she deeply values the Scientific Advisory Committee’s in-person interactions with potential Scholars: “The idea of the interview is … to give [candidates] the opportunity to present their research plan, to answer questions and to see how they respond in that setting,” she says. “It is very much about the science, their ideas, their innovative and creative approaches, and their risk-taking.”

Titia de Lange (1995) recalls that when she entered university, “I decided I wanted to study chemistry, because that was the only thing I enjoyed. But there were no women in chemistry—not just professors, but no students either.” She decided to study biology, and has paved her own way ever since, revealing fundamental mechanisms that protect the ends of their chromosomes, or telomeres, from degradation—processes that are critical to understanding both genome maintenance and cancer development.

Susan Dymecki (1999) has worked to elucidate the development of the brain’s serotonergic system, bringing insight into serotonin involvement in such diverse disorders as sudden infant death syndrome and depression. She joined the Foundation’s Scientific Advisory Committee in 2017 and serves as the Program Head of Harvard’s Biological and Biomedical Sciences Ph.D. Program. “One of the best parts of my job is working with the young trainees who will be the next generation of scientists shaping our world,” says Dymecki, who has been recognized for her mentorship.

Hao Wu (2002) uses advanced imaging techniques to characterize the intricate higher-order structures of “inflammasomes”—multiprotein complexes that initiate immune responses to viral and bacterial pathogens. When she was a medical student in Beijing, a conference presentation featuring the three-dimensional structures of viruses inspired her to move to the United States and pursue a Ph.D. in X-ray crystallography. “Instinctively, I thought this could be a really good fit for me, because of my interest in math and physics,” she recalls.

Laura Johnston (2004) explores the intricate circuits that lead formless masses of fruit fly (Drosophila) cells to become eyes, legs and wings. Her work has uncovered a key pathway involved in cell competition, a critical activity for the formation of healthy adult tissues. “Whenever cells have to live together as a group, they have to become, essentially, social communities—to interact, cooperate and function together,” she explains. “Our hypothesis is that cell competition ensures this kind of cooperative behavior by recognizing and eliminating rogue cells before they do damage.”

Hilary Coller (2005) investigates what happens when cells exit the cycle of growth and proliferation and become quiescent—not actively dividing, but maintaining their capacity to do so. The reversal of this process may explain why tumors that have lain dormant, sometimes for years, reawaken to cause a recurrence of a patient’s cancer. When she was a postdoctoral fellow, Coller recalls, her adviser suggested that she use a new technology to look into the “dead-end” phenomenon of cell quiescence. “I liked the idea of being a pioneer in studying a cell cycle state that was physiologically important but poorly understood,” she says.

Elsa R. Flores (2005) has built a career around unraveling the myriad activities of the p63 and p73 genes—close relatives of the p53 tumor suppressor gene. Her research is helping to identify new approaches to targeting this key cancer pathway, which has been described as “undruggable.” In 2016 Flores became chair of the Department of Molecular Oncology and co-leader of the Cancer Biology and Evolution Program at the Moffitt Cancer Center in Tampa, Florida. “These opportunities are rare,” she says. “I have always yearned to do something beyond my laboratory research to make a bigger impact on the cancer problem.”

Johanna Joyce (2005) focuses on understanding the tumor microenvironment—looking beyond cancer cells themselves to investigate how neighboring cells influence tumor progression and responses to therapies. Her recent work includes a number of notable studies on difficult-to-treat brain cancers. “There are many cells within the brain that you don’t find elsewhere in the body, and how they interact with, and potentially influence, the outcome of cancer cells in the brain, is something that we really wanted to delve deeply into,” Joyce says. “We see this as an opportunity to make an impact and learn something that was never known before.”

Diana Bautista (2010) is exploring how skin cells and immune cells collaborate with the nervous system to drive chronic itch. Her lab has identified several subtypes of somatosensory neurons that appear to be dedicated to acute and chronic itch, separate from the pain pathway. Bautista is also dedicated to bringing students from diverse and nontraditional backgrounds into science through teaching, outreach and mentoring. “As someone who didn’t think about science until a later age, I feel I’ve been really lucky in getting to have this amazing career in research and education,” she says. “I definitely want to pass it on to the next generation.” 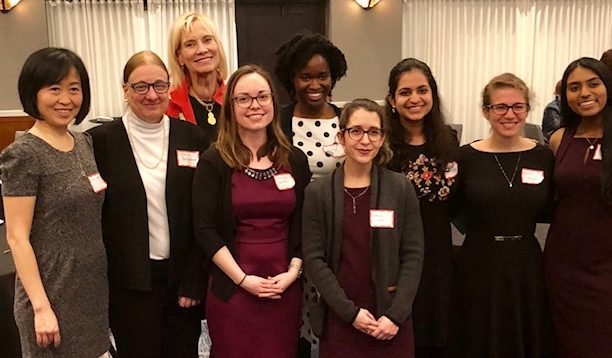 Elizabeth Good Christopherson, President and Chief Executive Officer of the Rita Allen Foundation (third from left) with Dr. Gloria Bachmann (second from left), Professor of Obstetrics and Gynecology and Professor of Medicine at Rutgers Robert Wood Johnson Medical School, along with students at the Association for Women in Science New Jersey Mentoring Awards, where Ms. Christopherson was honored for leading work that has an important impact in the STEM ecosystem. New Jersey Assemblyman Dr. Andrew Zwicker, a physicist and science educator at Princeton University’s Princeton Plasma Physics Laboratory and chair of the New Jersey Science, Innovation and Technology Committee, presented a resolution for Ms. Christopherson as part of the evening’s program.