Growing up in Corpus Christi, Texas, Elsa Flores was encouraged to follow her unflagging “curiosity about how things work.” Inspired by her father, an educator who studied biology and chemistry, Flores had always envisioned a career in science. But she felt uncertain about where to attend college—whether to focus on scientific training or seek a liberal arts education. 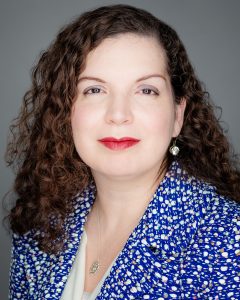 In the end, she enrolled at the Massachusetts Institute of Technology, where she majored in chemical engineering—and later returned as a postdoctoral fellow. Today, she still feels confident in her choice: “For science, it was such a great environment to be in,” she recalls. “Everything was research-oriented, and there were so many opportunities to be involved in projects with leaders in engineering and cancer and different fields.”

Flores was especially intrigued by the possibilities of engineering to tackle problems in human health—such as Robert Langer’s efforts to develop sophisticated drug delivery systems. To gain experience in biology, she conducted research on the environmental and genetic origins of breast cancer with Helmut Zarbl (now at Rutgers University).

Further inspired by the cancer diagnoses of her maternal grandmother and aunt, she decided to continue examining the underpinnings of cancer as a graduate student at the University of Wisconsin-Madison. “I wanted to study something that I thought was a really important problem,” she says. In Paul Lambert’s lab, Flores applied her engineering mindset to dissecting the life cycle of the human papillomavirus, a major cause of cervical cancer.

Since 1999, she has built a career around unraveling the myriad activities of the p63 and p73 genes—close relatives of the p53 tumor suppressor gene. Her research is helping to identify new approaches to targeting this key cancer pathway, which has been described as “undruggable” because the p53 family of genes encode transcription factor proteins that activate the expression of numerous other genes—a function that is difficult to restore when lost due to mutation.

“I was fortunate to be recruited into a leadership position…These opportunities are rare, and I have always yearned to do something beyond my laboratory research to make a bigger impact on the cancer problem.”

Flores first came to focus on p63 and p73 as a postdoc with MIT’s Tyler Jacks. In his lab, she led work showing that p63 and p73 are required for cells to undergo p53-dependent apoptosis (“cellular suicide”) in response to DNA damage—a process that often goes awry in cancer. Flores also demonstrated for the first time that p63 and p73, like p53, could also function as tumor suppressor genes, with mice carrying mutations in p63 and p73 developing metastatic tumors similar to human tumors with p63 and p73 deficiencies.

She joined the faculty of The University of Texas MD Anderson Cancer Center in 2004, and became a Rita Allen Foundation Scholar the following year. Flores and her team have continued to investigate the functions of p63 and p73, uncovering layers of regulatory activities that govern normal development and cancer. They showed that both transcription factors are involved in regulating DNA repair, controlling sets of genes distinct from those activated by p53. They also found that one form of p63 could prevent tumors from metastasizing by modulating the production of microRNAs—RNA molecules that silence the expression of particular genes.

More recently, Flores has extended this foundational knowledge of the p53 family to examine how different forms of the p63 and p73 proteins can act to suppress or promote the growth of tumors. She and her colleagues discovered that, in mice deficient for the tumor-promoting forms, tumors regressed thanks to the increased production of amylin, a small protein made by the pancreas along with insulin that interferes with tumor metabolism. This result has led to a clinical trial of a synthetic amylin, already used to treat diabetes, as a potential therapy for intractable skin cancers.

In 2015 Flores received an Outstanding Investigator Award from the National Cancer Institute, and in 2016 she moved to the Moffitt Cancer Center in Tampa, Florida, where she chairs the Department of Molecular Oncology and serves as co-leader of the Cancer Biology and Evolution Program. Here, Flores reflects on the development of her research and career, as well as her passion for advancing women in science.

What did you learn from your first research experience as an undergraduate?

By the time I decided I was interested in biology I was a sophomore, and so I had taken a lot of engineering courses. At the time biology was not required as a core class at MIT, so I really had very little biology experience, and was going around to these biology labs asking them if they would take me on to do a project, and many of them said no.

But this professor, Helmut Zarbl, was so nice. He just said, “Oh, I’d love to have you in the lab. Biology is just learning a new language.” And so in his lab I learned simple things like cloning genes and DNA sequencing. To me it was a different type of engineering—genetic engineering. So I really appreciate that he gave me that opportunity, and I always think about that when people come to my lab from different backgrounds. I try to look at the potential that they have versus what kind of experience they have.

How did you come to focus your research on p63 and p73?

As a postdoc, I originally went into [Tyler Jacks’] lab wanting to work on Rb, which is one of the other big tumor suppressor genes. I was interested in Rb was because as a graduate student I had been working on [human papillomavirus], and we knew that crippling the Rb pathway was very important for cervical cancer. I talked to about 10 different postdocs that were working on Rb, and every idea that I had, somebody had already thought of.

So there really was no space for me to flourish, and I went back to Tyler and said, “I don’t know if this is going to work.” And he said “Well, I don’t have that many people working on p53.” Fortuitously, p63 and p73 had just been discovered about two years before, and there was not very much known about them, and there was absolutely nothing known about them in cancer. I think some of the people in the lab kind of dabbled in it and didn’t think it was that interesting.

But I thought, “OK, I’ll work on these genes”—mouse models had already been made, so the tools were in place. And we found that the [p53] family of genes worked together to suppress tumorigenesis, and of course it’s context dependent. It’s more complicated than just p53 by itself, but just that finding that [p63 and p73] also played a role in suppressing tumorigenesis meant that we would be able to figure something out about them that could help us target the p53 pathway.

What is behind the recently launched clinical trial resulting from your research?

One of the things that I wanted to work on, which I proposed in my Rita Allen application, was to study the different isoforms [protein variants encoded by the same gene] of p63 and p73. There are some isoforms that act as tumor suppressors and some that act as oncogenes, and so when I started my faculty position I made mouse models to knock out the different isoforms and study their functions in vivo.

Of course, that was a long process…about two years ago we published this paper in Nature showing that if you inhibit the oncogenic isoforms of p63 and p73, you can boost the tumor suppressive isoforms, and then they turn on this pathway involved in metabolism. [Within this pathway], we actually identified a gene that encodes a peptide that’s cosecreted with insulin. And fortuitously, there’s a synthetic analog that’s used in the clinic; it’s approved [by the Food and Drug Administration] for Type 1 and Type 2 diabetes.

So we got some of this drug, we treated our mice that have a p53 deletion or mutation, and we saw rapid tumor regression. A lot of the work that we did in that paper was in genetically engineered mouse models, so now we’re testing it in the clinic for very aggressive cutaneous squamous cell carcinomas that are basically non-resectable [removable]—there’s really no therapy for them. The idea is to treat them with this drug to see if the tumor will regress.

What’s your advice for women pursuing a career in science?

I think there are two important ingredients for success, and it all has to do with your support team. First, choose your partner in life wisely. I am fortunate in that I have a supportive husband who does at least 50 percent of the work at home. He is a successful physician-scientist at Moffitt Cancer Center who understands my passion for my work and for our family. Second, I have always gravitated toward mentors who encourage me, support me and push me to be the best scientist that I can be. I was fortunate to be recruited into a leadership position by John Cleveland at Moffitt Cancer Center. These opportunities are rare, and I have always yearned to do something beyond my laboratory research to make a bigger impact on the cancer problem. Lastly, I have learned to “ignore the noise” and to steer clear of people with negative messages.