Gilbert Chu’s passion for biology stretches far back. By ninth grade, he was conducting brain surgery in rats and corresponding with researchers about implanting brain electrodes. But during his first week of college at Princeton, a run-in with a premed student who demanded to copy his lab report sent him into the arms of his other love, the beauty of math and physics. Chu focused on elementary particles, the basic building blocks of matter, and earned a Ph.D. in theoretical physics at the Massachusetts Institute of Technology. During his postdoc at the University of California, Berkeley, a professor of physics and radiology challenged him to devise a mathematical method for using one of those elementary particles, the positron, for medical imaging of tumors. The excitement of meeting this challenge led Chu to realize that biomedical research was his true calling. 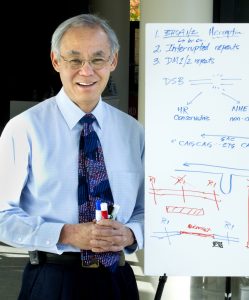 Gilbert Chu (wearing a genome tie) with his portable classroom giving office hours for medical students. Chu is a 1988 Rita Allen Foundation Scholar and a Professor of Medicine and Biochemistry at Stanford University School of Medicine.
(Photo: Courtesy of Gilbert Chu)

After getting an M.D. from the joint Harvard/MIT Health Sciences and Technology program, and completing a medical residency at Massachusetts General Hospital, Chu went on to Stanford for a fellowship in medical oncology followed by a postdoc in the lab of biochemist Paul Berg, the father of recombinant DNA research (Luis Villarreal, a 1983 Rita Allen Foundation Scholar, also conducted postdoctoral research with Berg). Chu set out to clone the genes responsible for xeroderma pigmentosum (XP), an inherited disease that often causes cancer and is characterized by the body’s inability to repair sun-damaged DNA.

Those were early days for molecular biology, and techniques for working with DNA were spotty. Chu wanted to clone the XP genes by introducing DNA into XP cells with an electric field, a method called electroporation. One of Berg’s former students had developed a method in which hand-held electrodes delivered pulses of unknown voltage, sending sparks flying across the solution. “It was just haphazard, and it sometimes sent the researcher flying as well,” Chu recalls. So Chu built an optimized electroporation device that was commercialized by the laboratory supply company Bio-Rad and for several years served as standard issue in molecular biology labs. “I’m very proud of that,” he says.

In 1987, Chu launched his own lab at Stanford, continuing his work on XP with the aim of untangling the biochemical mechanisms underlying DNA damage and repair. The following year he became a Rita Allen Foundation Scholar. His lab identified two partner proteins that stick to damaged DNA, one of which turns out to be missing in a subset of patients with XP. They then worked backward to determine the protein’s molecular role in targeting the ultraviolet radiation damage for repair.

Later his lab discovered the role of another protein, Ku, in repairing DNA double-strand breaks. Meanwhile, in the clinic, Chu kept encountering patients who were experiencing serious toxicities from cancer treatment—particularly ionizing radiation, which causes DNA double-strand breaks. He dove into genomics, using the emerging technology of DNA microarrays to gain a global picture of gene expression levels under different conditions. Chu compared gene expression patterns in patients who experienced radiation toxicity versus those who did not. But he couldn’t separate the signal from the noise, largely because no established method for analyzing gene microarray data existed. Chu and his colleagues developed a new approach that was soon widely adopted as the standard in the field. “That was a very short paper—five pages long, at least five years to produce—but it had an enormous impact on people’s ability to analyze microarray data reliably,” Chu says. “And my background in math and physics made it possible.”

“Discovering that I can still help after all available treatments have failed was something that I didn’t expect. I often think, ‘Well, this person needs me. I have to figure out how to help in ways not covered by the medical guidelines.’ I didn’t realize that would be so satisfying.”

A few years later, Chu’s group published results from a small clinical trial that showed the technique could potentially predict patients’ radiation toxicity. Although the work was never developed into a clinical test, Chu has found himself following his clinical nose in his research. “I want to use my physics and medical background to help people,” he says. “So I try to make choices that I think are going to help the greatest number of people.”

Here, Chu muses on his diverse interests, his latest passion, and the grace he finds in being a part of his patients’ lives—all the way to the end.

What convinced you to change your course from theoretical physics back to biology?

I’ve always been interested in many things, which gave me the flexibility to maintain my love for biology, even as I kept doing my physics. I remember being on a bus with two other graduate students in theoretical physics, going between Harvard and MIT. It was in the 1970s; we were worried about our place in the world, and we thought things were going to hell in a hand-basket. Martin Luther King had just been assassinated. The U.S. was bombing Vietnam and Cambodia. Riding the bus with us was a junior faculty member. He said, “You know, I don’t know if we’re really helping the world. If we really wanted to help we’d all go into medicine.”

All three of us graduate students on that bus ride ended up going to medical school. I was last. When I was at Berkeley, I realized that if I kept waiting it would be too late. I’d never taken a biology class, but I did extremely well on the MCATs because I’d been reading biology voraciously. The Harvard/MIT M.D. program was very welcoming to people with my background. I ended up doing a summer project with the immunologist Herman Eisen, and then spending a year in the lab with Phil Sharp. And then, I was hooked!

What are you working on these days?

One of my patients became mentally dulled and then delirious from chemotherapy. I figured out that the chemotherapy caused a dramatic increase in her blood ammonia, which is a brain toxin. So I sequenced her exome [all the protein-coding genes] and did a small clinical trial to show that patients susceptible to this phenomenon aren’t rare. We’re trying to get the work published, and I think it’s going to explain a large number of cases of what cancer patients call “chemobrain.”

In doing the clinical study I discovered how hard it is to measure blood ammonia levels. It must be done at a laboratory connected to a hospital, because the sample must be obtained intravenously and processed by a central lab within half an hour. So I started looking for a method to measure ammonia in blood from a finger-stick, and provide results in the home or at the bedside. Serendipitously, at a dinner fostering interdisciplinary collaborations, I met a chemist whose graduate student had made a device that might work for blood. So we’ve done a clinical trial showing that our device is just as accurate as the Stanford clinical lab. We want to start a company and get funding for FDA approval.

Looking back on the different strands of your career, what have you found the most surprising?

I’m not surprised at all that I love the science and the teaching. The thing that has surprised me the most is that I treasure my relationships with patients. My goal was to use research to help cancer patients. And I wanted a foot in the clinic so that it could inform my research. But because we’re a tertiary care referral center, I often see patients who have run out of options. In working with them, I often take on the role of teacher, confessor and counselor. There’s no formula; everybody is different.

Discovering that I can still help after all available treatments have failed was something that I didn’t expect. I often think, “Well, this person needs me. I have to figure out how to help in ways not covered by the medical guidelines.” I didn’t realize that would be so satisfying.