With epidemics and outbreaks of Ebola virus, Zika virus, West Nile virus and others posing serious threats, many virologists are scrambling to learn how to better fight these human pathogens. Luis Villarreal has studied viruses for nearly 50 years, and considers them much more than infectious agents. For him, viruses are at the leading edge of biology, and a vital driver of the evolution of all living things—humans included. 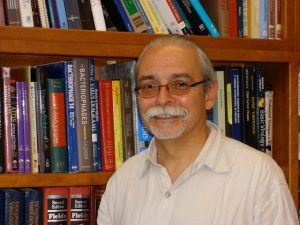 “What interests me is, what does it take for a virus to develop a persistent relationship with its host?” Villarreal says.“We have persistent, stable relationships that are passed from generation to generation, and you seldom, if ever, see an acute outcome with these species. But in other related or non-related hosts there can be disease consequences. So we know that in some circumstances these very same viruses can be quite harmless, while in others they are capable of causing severe and lethal infections.”

As an example, Villarreal cites avian influenza that emerged in China and has been traced to a particular lake where the virus mutated and resulted in the deaths of millions of domestic birds. Yet avian influenza is found in a range of wild bird species throughout the world, and for the most part these birds are not harmed by its stable persistence in their genomes. “There are these completely different relationships of viruses to hosts, and that is what fascinates me—what are the evolutionary consequence of these relationships?” he asks. “The assertion I’m making is that viruses have provided the raw material to influence the complexity of all living things.”

Throughout his career, Villarreal has developed tools to study viruses and has deciphered some of the fundamental processes of viral replication and transcription. Recently he has been consumed by concepts and theories of evolution as they relate to what he calls the “virosphere”—the large network of viruses that inhabits our planet. “My work really comes together in my recent thinking on the role viruses have in life in general,” he says.

“Viruses are the unending front of evolution…they continue to shape the trajectory of life on the planet, including that of humans.”

Villarreal grew up as an “urban migrant”in East Los Angeles. His family moved often because his father bought, fixed up and sold houses to supplement the family’s income. “I had a very fragmented educational experience, but at the same time, that made me more resilient and adaptable,” he says. Villarreal was persistent in his curiosity: he experimented with chemical reactions and took things apart (including motorcycles) to understand how they worked.

His interest in virology was seeded as an undergraduate at California State University, Los Angeles, when he saw an electron micrograph of an arbovirus inside the cytoplasm of a cell. “It was clearly the interface of chemistry and life,” he recalls. “It was this crystalline structure that had clear biological consequences. I was looking at it from the perspective of a chemist. I wanted to understand what the biology was.”

After receiving his bachelor’s degree in biochemistry, Villarreal entered a Ph.D. program in the Division of Biological Sciences at the University of California, San Diego, working in John Holland’s laboratory on negative-strand RNA viruses. Villarreal characterized the behavior of vesicular stomatitis virus (VSV) and the related rabies virus, showing that defective particles made from mutant VSV virions, when mixed with virulent, wild-type virions, resulted in a persistent infection but did not kill the host. “This idea of defective [virions] that can interfere with replication of the wild-type virus, modifying the trajectory of an acute infection—that’s a topic that still interests me today. I think it has big consequences for the outcome of the relationship between a virus and host,” he says.

Villarreal’s experience in the Holland lab solidified his commitment to research, but he felt that he needed to broaden his scope beyond negative-strand RNA viruses. In 1976, he began a postdoctoral fellowship at Stanford University in the laboratory of Paul Berg, who is credited with constructing the first recombinant DNA molecule (Gilbert Chu, a 1988 Rita Allen Foundation Scholar, also conducted postdoctoral research with Berg). Villarreal developed the now widespread technique of in situ plaque hybridization, demonstrating its utility to identify simian virus 40 (SV40) by its DNA sequence rather than its biological properties. “For me, it was the first step in manipulating a genome and starting to understand transcription,” he says.

In 1980, Villarreal started his own laboratory at the University of Colorado School of Medicine, and developed the first direct transfection of polyomavirus DNA into the tissue of newborn and adult mice. Villarreal became a Rita Allen Foundation Scholar in 1983, and in 1985 he moved to the University of California, Irvine, where he directed the Center for Virus Research from 2000 to 2010 and is now a professor emeritus in the Department of Molecular Biology and Biochemistry. 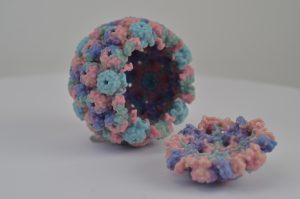 Rita Allen Foundation Scholar Luis Villarreal has studied how viruses such as polyomaviruses establish and maintain persistent relationships with their mammalian hosts. Shown here is a 3-D printed model of a polyomavirus capsid.
(Image: Flickr, NIH/NIAID)

Villarreal has continued to study the mechanisms of tissue-specific replication and transcription of SV40 and other mammalian polyomaviruses. “These viruses make their living in their host as unapparent, persistent lifelong infections,” he says. According to Villarreal, this concept of persistence is fundamental to how viruses work and is the common thread that runs through his research.

Here, Villarreal describes his unwavering perspective on virology, how the scientific community’s view of viruses has changed, and the complexities of assigning meaning in biology.

Some biologists view viruses as a tool to understand biological systems. Did you initially see viruses this way?

Many researchers do see them as a simple model that can be manipulated to understand how genes or [DNA] replication work. In fact, scientists have been highly productive in elucidating the mechanisms of those processes using viruses. I suppose I never really thought of them that way, but rather as fundamental—as units capable of significant adaptation and modification of the survival dynamics of their hosts.

How have scientific perspectives on viruses evolved since you first began to study them?

I first started teaching virology to medical students in the late 1970s, when we had eradicated smallpox from the planet, and many other viral infections, including measles and polio, seemed to be on the wane because of vaccines. At that time, it was declared by various famous virologists and directors of the National Institutes of Health that virology was going to be a thing of the past—something that medical students would study in their textbooks, but nothing that was going to affect the future of medicine, because we had figured it all out!

Now, with millions of people still affected by emerging viruses, that view couldn’t have been more wrong. It’s striking that every year we have some new viral emergence. Viruses are the unending front of evolution. We need to give them that descriptor officially, as opposed to just treating viruses as some transient mutational phenomenon. They continue to shape the trajectory of life on the planet, including that of humans. Yet it’s never admitted that this is the front of biological evolution and that it affects human survival.

What is prominently on your mind right now?

One of the most fundamental concepts to emerge for me in the last five years has come from talking to the philosopher Günther Witzany about the history of science and language. Assigning meaning to information is part of a social enterprise. We have codes that specify meaning, including the biological code of DNA, and the history and context of these codes matter in how we apply them.

For example, a herpes virus can sit inside a peripheral neuron as a strand of DNA in a silent state for a lifetime. That same DNA strand inside a brain neuron can cause fatal encephalitis. The same host, code and virus, but a different history and context result in a vastly different outcome: persistence or acute death. A code can’t have meaning unless there is a population using it, both in society and in biology. This line of thinking leads to the need for a deeper evaluation of where we as a society stand in terms of understanding biology.