As an undergraduate studying biophysics, Jon Levine didn’t see himself going into medicine. He trained as a neuroscientist, first earning a Ph.D. at Yale, and then beginning a postdoc at the University of California, Berkeley, on the genetics of flight in fruit flies.

It was 1972, and on his way to the lab he would pass people protesting the Vietnam War or rallying for other political causes; somehow, against that backdrop, his research on flies felt lacking in relevance, he recalls.

A mentor connected him with Howard Fields, a new hire at the University of California, San Francisco, who was starting a lab and clinical practice in pain. On Wednesday afternoons, Levine would accompany Fields to see patients, many of whom suffered from devastating pain syndromes.“We would walk back across the street and I would be in tears,” Levine says. “One day, he just put his arm around me and said, ‘Jon, if you can learn to deal with this, you can learn to deal with anything.’” 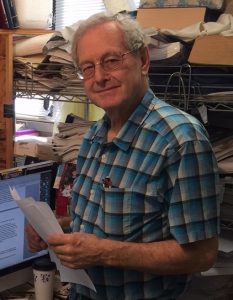 Levine soon enrolled in medical school at UCSF, continuing to work with Fields. In 1978, the duo published a landmark paper on the placebo effect, showing that it is mediated by endorphins—natural opioid compounds produced by the central nervous system. This was the first study to identify a biological basis for the phenomenon. During a subsequent fellowship in rheumatology, also at UCSF, the chief of the division—the legendary physician and hospital administrator Jack Stobo—discouraged him from pursuing pain research, so Levine proposed investigating a broader question related to the nervous system’s role in inflammatory disease: Why do people who have strokes not get arthritis on the affected side of their bodies?

“We have made a lot of progress in treating acute pain, but the treatment of chronic pain has lagged far behind. One of the critical scientific questions is, ‘What is chronic pain?’”

Back then the field was still underdeveloped; most researchers explored pain’s genesis in the central nervous system. Levine’s work, however, prioritized the periphery—a focus he maintained when he launched his own lab in 1983. “One of the interesting aspects of studying the effect of stroke on pain and inflammation was seeing how injuries in the central nervous system can cause a downstream effect—a secondary injury in the peripheral nervous system,” he says. His lab began to develop a program dissecting peripheral contributions to pain, including how processes such as inflammation can sensitize the body’s pain machinery. Five years into his academic post, Levine became a Rita Allen Foundation Scholar, setting out to define the role of specific molecules in this process and identify compounds that might modulate it.

In the decades since, Levine has made wide-ranging and fundamental contributions to pain research—seeking synergistic effects between different pain drugs; identifying a dramatic difference in the way men versus women respond to opioids; participating in cloning the heat-activated capsaicin receptor, which is found in neurons that process pain; and characterizing the mechanisms that underlie chronic versus acute pain. “There is no area of pain that I’m not interested in,” he says.

Levine says researchers still have a tremendous amount to learn about pain, despite advancements in recent decades. “We have made a lot of progress in treating acute pain, but the treatment of chronic pain has lagged far behind,” he says. “One of the critical scientific questions is, ‘What is chronic pain?’”

Solving that and other conundrums will require clinicians, researchers and advocacy groups working closely together to define the most clinically relevant issues, Levine says. It will also require extensive mechanistic studies in humans—in addition to in animal models, which often show an unclear relevance to human pain syndromes.

Here, Levine discusses some surprising discoveries—both in the clinic and in the lab.

What experiences spurred your early commitment to pain research?

One morning during my junior surgery rotation in medical school, I saw a young woman who had been brought in by an ambulance; she was lying in the hallway screaming. A nurse said she had been shot through the window of her apartment, but the trauma surgeons had determined that the bullet wasn’t near any vital organs, and that they’d get it out maybe tomorrow. I asked, “But what about her pain?” And the nurse said, “It’s OK, it won’t kill her.”

So I went to talk to Howard [Fields], and he gave me a recent paper from the Annals of Internal Medicine about the undertreatment of pain. It looked at the recommended drug dosages for people with a certain amount of pain, how much clinicians actually prescribe for these patients—which was less—and how much nurses actually administer—which was even less. By the time all was said and done, these patients were being vastly undertreated for very straightforward pain—not even chronic pain, just basic stuff. So I told the head of the trauma service that I would make it illegal to not treat people’s pain properly. He invited me to give surgery grand rounds at San Francisco General Hospital about that, after which everybody said, “Oh, this is terrible! We’ll do better!” I went back to my rotations, but several years later—it was before HIPAA, so I could look at patients’ records—there was no change at all. There’s no question that we need to fix this.

How did you discover the sex difference in how well opioids work?

The work with sexual dimorphism is something we’re very passionate about. We were studying the interactions of different pain drugs that work on the endogenous pain control pathway through different neurotransmitter receptors. Because each drug has dose-related side effects, we thought we could maybe produce synergy between their analgesic effects, limiting the side effects. In one of our experiments, by chance, there were statistically more women in one group and more men in the other. When we wrote up the paper, we noted this, but said that we didn’t think it affected the findings. It was a very short paper, and the reviewer said, “Well, you have the data; why not run the analysis?” I would love to kiss this person now. About a half hour after my colleague went to run it, he came back and said, “You’re not going to believe this—everything we’re looking at has to do with sex.” This completely turned things around for us.

We were looking at a class of narcotics called kappa-opioids—nalbuphine, butorphanol, pentazocine— which are available clinically. When we went back for a closer look, we found that they’re great analgesics for women—as good as morphine, but that in men, they can make pain worse. The OB-GYNs have known for years that these are great drugs, because they only treat women. Back then, Parke-Davis [a subsidiary of Pfizer] had been developing a kappa-opioid, and somebody from their group was visiting just as we finished this work on sex differences but before we published. The company had done three studies. In one, they got very good analgesia with the kappa-opioid, and in the other two, they got terrible results. Those two were wisdom tooth studies, but they only used men because they didn’t want to have to deal with the menstrual cycle. The one where it worked was in women, for post-episiotomy pain. I asked this guy, “Is there any chance this could be due to sex differences?” He said, “Absolutely not.”

What exciting new areas of pain research are you pursuing now?

We’ve gotten very interested in the environment in which the cell lives—that is, the extracellular matrix and its role in pain. One of the most common new treatments for osteoarthritis pain is to inject a non-protein extracellular matrix molecule called hyaluronan into joints. It changes the pain phenotype as effectively as injecting corticosteroids. So we’re studying how, in the setting of inflammation, hyaluronan is chewed up into little bits and pieces, and how those bits and pieces are toxic to the pain system. We’re also looking at a population of pain-sensing neurons and their interaction with an extracellular matrix molecule called versican, which plays an incredibly important role in activating nociceptors [nerve cells that respond to pain]. If we could figure out what binds to this molecule, that compound could lead to a therapy that could silence cells important for certain pain syndromes, while leaving protective pain mechanisms intact.