Kathleen Foley was just beginning to delve into the emerging field of pain assessment and treatment when she was selected as a Rita Allen Foundation Scholar in 1978. As a member of the second class of Scholars, she used her Foundation grant to study pain in patients suffering from shingles. 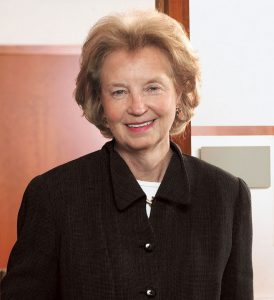 Today, Foley is recognized as a leader in developing global standards for pain management and palliative care. She is Attending Neurologist Emeritus in the Pain and Palliative Care Service at Memorial Sloan Kettering Cancer Center. In 1981 Foley helped to establish this first-of-its kind, team-based service, which ensures that pain management and palliative care are integrated into cancer treatment for all patients. From 1994 to 2003, she directed the Project on Death in America, which focused on changing attitudes and policies toward end-of-life care.

“The idea of the interview is…to give [candidates] the opportunity to present their research plan, to answer questions and to see how they respond in that setting. It is very much about the science, their ideas, their innovative and creative approaches and their risk-taking.”

Here, Foley recounts her unexpected introduction to clinical pain research, and reflects on the courage and ingenuity she seeks in new generations of Rita Allen Foundation Scholars.

How did you first get involved in pain research?

At the end of my neurology residency program at New York Hospital [now New York–Presbyterian], my mentor Jerry Posner, who was one of the co-chairs of our department, said, “We need someone to come and be a clinician-researcher at Memorial Sloan Kettering Cancer Center. We need someone to study pain.”

I said, “Well, I don’t know anything about pain.” And he said, “That’s fine. Not too many people do.”

I had the opportunity to work with some great researchers. I spent the first year as a fellow in what is called neuro-oncology, a new field that studied tumors of the brain and metastatic disease in the rest of the neurological system. We made the decision that pain was a neurologic complication of cancer—that’s how we characterized it in the department of neurology, and we did analgesic [pain relief] studies on cancer patients.

The analgesic study group at Memorial was well established in the field of clinical analgesic studies, but I had no experience with using analgesic medicines clinically. I had been through an internship and three years of a superb neurology program, and been a chief resident, but I had probably never written an opioid prescription for a patient, and had never thought much about how to treat patients with pain. It was humbling in the first couple of years, because I needed to learn about pain, and at the same time I needed to treat cancer patients.

Their clinical care was pretty abominable. They were given only injectable pain medicines every four to six hours. They were not allowed to have the medicine before those time points, and the nurses would often give them solutions of saline as a placebo. There was an incredibly negative perspective on using opioid drugs in patients with pain—these were patients with advanced cancer who were dying, and yet there was this serious prejudice. I learned firsthand that the prejudice was profoundly impacting how we treated patients, and to address this barrier we needed clear scientific guidelines.

How did you become a Rita Allen Foundation Scholar, and what was the impact of the award on your career?

The application I wrote was focused on doing a clinical review of all the published literature on the treatment of patients with herpes zoster, or shingles, which is a very painful disorder that occurs most typically in the elderly. It comes from the activation of a latent virus that produces a rash, and then a severe neurologic deficit associated with severe neuropathic pain. I proposed to review the literature and then develop a protocol to study the patient population, look at the neurologic deficits and look at treatment approaches.

Receiving the funding at that point in my career led my institution to think that I was worthy of being funded by an outside source. This was really helpful, because about a year later I applied to the American Cancer Society for a faculty development award, and also received that. I think it was a credit to the Rita Allen Foundation that someone believed pain research might be reasonable work. And if the Foundation had not identified pain in its list of topics, then I would never have been an applicant. It is as simple as that. At that point in time there were not any funding sources for pain research.

How have pain research and treatment changed since then?

Since the late ’70s and ’80s we have seen an expansion of interest in the molecular biology, pharmacology and genetics of pain. This has led to an extraordinary body of work that has taught us so much about how the brain modulates pain—from the role of descending systems that inhibit pain, to the local control that happens at the spinal cord level, to the different types of pain and different treatment approaches.

Sadly, much of this work has not yet been translated into clinical practice, and we still lack effective drug therapies to manage clinical pain. But we do know so much more about the genetics of different pain disorders. For example, there is a migraine variant that is stereotyped and painful that is a unique a genetic disorder. If you can identify that genetic variant you can dramatically alter that disorder with specific drug management.

Yet we still don’t have safe and effective treatments for inflammatory arthritic pain or for cancer-related neuropathic pain. At the same time, we do know how pain is processed in the nervous system, and the receptors and neurotransmitters that modulate pain, but we lack a silver bullet for pain treatment.

One advance that has impacted pain treatment is the recognition that patients with postoperative pain can safely control their analgesia. We now allow postoperative patients to use a small pump device where they press a button to receive a dose of pain medicine titrated to their degree of pain. This is called patient controlled analgesia, and represents a major advance based on the premise that patients can reliably report their pain and treat it with a defined dose of pain medicine that they control.

What are some of the challenges in treating and understanding pain?

A major controversy in the clinical management of pain has been the use of opioids in chronic neuropathic pain, which is often caused by damage to the nervous system. Our studies demonstrated that opioids were effective for patients with neuropathic pain, but that they required higher doses compared to patients with non-neuropathic pain. The recent opioid prescription drug abuse epidemic has further confounded this controversy, leading to a range of state and federal regulations that are focused on limiting opioid prescribing for pain.

The field of pain research is now in a very challenging position. Less than 1 percent of the NIH budget is spent on supporting pain research, yet more than 100 million Americans report chronic pain and more than $500 billion is spent on treating and caring for patients with pain each year. There is now a National Pain Strategy and an Institute of Medicine Report calling for a cultural transformation in how we address pain as a serious public health issue. The expansion of research support and the development of clinical pain research centers will enable a more coordinated approach to how we care for patients in pain.

There is a two-stage process. All the applications are reviewed and ranked by all the members of the Scientific Advisory Committee, and then the top eight or 10 candidates come for an interview. The idea of the interview is not to be intimidating to the investigators, but to give them the opportunity to present their research plan, to answer questions and to see how they respond in that setting. It is very much about the science, their ideas, their innovative and creative approaches and their risk-taking.

We want to invest in individuals who have proposed great ideas to study and clearly have been successful. But we are not investing in a specific idea per se, because if their proposal doesn’t work, we want to know that they can move on and do something equally creative. There is also a lot of emphasis placed on their ability to bring together molecular biology with physics and mathematics, and with innovative techniques. Some are tool developers, and some are asking very basic biological questions. Others are more translational.

Not all of them come with this idea about how they’re going to change the world because they discover a new fact, but rather that this is such an important, basic scientific question that they need to answer it. We do have a list of topics—cancer, immunology and neuroscience—but we’re expansive in how we view those categories. It is more important that an idea is well developed and challenging, and that the individual has a track record of doing good work.

As we look ahead to our 40th anniversary plenary meeting, why is it important that we bring together all of our Scholars?

The Rita Allen Foundation award has had an enormous influence on people’s careers, and I think we have not captured that enough. So we’d like to hear more about those experiences. Also, they’re part of a tribe because they received this award. They’ve all uniquely gotten to their current positions through various paths, and they have a host of experiences that may help the next generation. So I think we want to say, “We’re glad you had a Rita Allen award. How can you mentor and support the next generation of Scholars?”