Robert Weinberg began his studies at the Massachusetts Institute of Technology with the intention of preparing for medical school, but before long he was dissuaded from this path. “I heard that doctors had to stay up all night,” he says, “so I switched to becoming a biologist.” 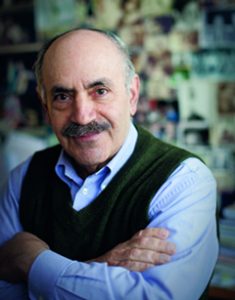 Weinberg soon found that he relished the research life—he thrived on the continuous inquiry and tinkering of the scientific process. He went on to make a number of pivotal discoveries that have transformed our understanding of the genetic origins and development of cancer. He is known for identifying the first human oncogene, ras (an abbreviation for rat sarcoma virus, in which the gene’s homolog was first characterized); he and his colleagues also isolated the first known tumor suppressor gene, Rb (for retinoblastoma, a type of eye cancer).

Weinberg first tried laboratory research as an undergraduate at MIT, where he got to know David Baltimore (then a postdoc in James Darnell’s lab), who showed him the high standard of intellectual rigor required to perform first-class science. Weinberg stayed on at MIT for his Ph.D., working in Sheldon Penman’s laboratory and using human cell cultures to investigate the formation of ribosomal RNA and small nuclear RNA. After postdoc stints at Israel’s Weizmann Institute of Science and at the Salk Institute near San Diego, he returned to MIT to assume a faculty position, working first as a research associate with Baltimore until the MIT Cancer Center first opened in 1974. By then Baltimore had established his own laboratory studying the genetics, replication and expression mechanisms of RNA viruses—with a growing interest in mammalian tumor viruses as a means of understanding cancer. (Baltimore shared the 1975 Nobel Prize in Physiology or Medicine for his findings on the ability of RNA tumor viruses to reverse transcribe their RNA genomes into DNA.)

In 1973, Weinberg became an assistant professor in the MIT Department of Biology, and was selected as a member of the inaugural class of Rita Allen Foundation Scholars in 1976. During this time his research group was transitioning from its focus on cancer-causing retroviruses to studying how chemical carcinogens, whose ability to cause cancer was unrelated to tumor virus infections, were successful in transforming normal cells into cancer cells. “In 1979 we found that introducing DNA prepared from chemically transformed cancer cells into normal cells altered the behavior of the latter, converting them from normal cells into cancer cells,” he explains.

“That was a fundamentally important discovery,” he adds, in that it enabled the subsequent identification of oncogenes—cancer-causing genes—present in the DNA of these chemically transformed cells and then in a variety of human cancer cells. Weinberg and his team later demonstrated that converting fully normal cells into tumor cells actually required the introduction into these cells of at least two oncogenes. Still other work led to isolation of the first known tumor suppressor gene, termed Rb. These two classes of genes—oncogenes and tumor suppressor genes—are often likened to the accelerators and brake pedals of cells.

“It represented the first experimental proof that inside cancer cells, in the absence of any cancer viruses, there actually lay mutant cellular genes that are responsible for the malignant behavior of these cells. That work was just picking up then, and having the Rita Allen award was an enormous support.”

Many of these studies were performed in mouse or rat cell cultures.“In the following years,”Weinberg says,“we became interested in how to convert normal human cells into cancer cells, a task that turned out to be much more challenging.” In 1999, his research group succeeded at this task, which required the expression of two specific oncogenes in combination with a gene encoding the catalytic subunit of the telomerase enzyme. Expression of this enzyme allowed cells to continue lengthening their chromosome ends, or telomeres, and proliferate continuously for unlimited periods of time. (Telomere regulation has been extensively investigated by Titia de Lange, a 1995 Rita Allen Foundation Scholar).

Rita Allen Foundation Scholar Robert Weinberg and his research team have shown that a transcription factor called Twist1, known for regulating embryonic development, also plays a key role in breast cancer metastasis. The image on the left shows a metastatic nodule in the lung of a mouse with a breast tumor. Knocking down the expression of Twist1 in breast tumor cells prevents metastasis—the image on the right shows normal lung tissue.
(Images: Jing Yang)

Beginning in 2004 Weinberg turned his attention to the process of metastasis, in which cancer cells disseminate from primary tumors to distant sites in the body, where they often form secondary tumors. His group showed that a transcription factor known for regulating embryonic development also plays a key role in breast cancer metastasis, and that metastases arise from cancer cells that possess stem cell properties. Since then, “we have focused strongly on how metastasis occurs in human carcinomas and how the metastatic colonies are founded in distant tissues,” Weinberg says, “which is a critically important problem, because 90 percent of cancer-associated mortality is caused by metastases, not by primary tumors.”

He has received an impressive set of accolades for his pioneering discoveries, including the National Medal of Science (1997), the Wolf Prize in Medicine (2004) and an inaugural Breakthrough Prize in Life Sciences (2013; Titia de Lange was among the 10 other winners). However, he says, “what propels me every day is not the recognition, but sincerely the joy and pleasure of being in the lab and interacting with the people of my laboratory group, discussing science. That’s what makes it all worthwhile.”

Here, Weinberg recalls the significance of becoming a Rita Allen Foundation Scholar, and shares his thoughts on the state of cancer research and the training of young scientists.

What was the role of the Rita Allen Foundation award in your research career?

I was a junior assistant professor at MIT at the time. My work was moving ahead, but at a rather slow pace. My future was not so certain. I can say that being honored by receiving a Rita Allen award was a great boost for my morale. We had just begun to do some experiments that turned out to be the most important in my career, demonstrating that if you looked inside chemically transformed cells—that is, cells that have been transformed to a cancerous state through exposure to chemical carcinogens—that those cells actually can carry mutated genes, known as oncogenes, that are responsible for the aberrant behavior of those cells.

These days it sounds rather humdrum, but at the time it represented the first experimental proof that inside cancer cells, in the absence of any cancer viruses, there actually lay mutant cellular genes that are responsible for the malignant behavior of these cells. That work was just picking up then, and having the Rita Allen award was an enormous support.

What are some of the major challenges in cancer research?

People have not yet confronted the complexity of cancer in a realistic fashion. Although there are many “moonshots” proposed and many attempts at personalized medicine, the reality is that we still don’t really understand what makes cancer cells tick and how to effectively kill them. Overall, the clinical applications of basic cancer research have come at a remarkably slow pace, with the one exception of immunotherapy of cancer, which has exploded over the last five years and has proven to be very useful in effectively treating a subset of human cancers. Moreover, those promoting many kinds of molecularly targeted anticancer therapies and cancer genome sequencing have made promises that, to my mind, are unrealistic and unrealizable. We still confront some fundamental problems when trying to understand the complexity of how individual cancer cells operate and what makes them resistant to various kinds of therapy.

What skills do you think are most important for young scientists?

To my mind, the most difficult thing to master is not the experiment that can be done or the data that can be obtained. The most difficult thing is the prioritization of which experiments one does and which ones one doesn’t do. The number of possible experiments one can think up is more than the stars in the universe, while the number of truly interesting and important experiments is far more limited. The ability to acquire a taste for what’s important and what’s trivial is really the most challenging task for most graduate students, and beyond that, for postdocs.

I often confront this problem when I am running my own research group meetings, when one of my trainees gets up and tells us that they want to undertake this or that experiment. The experiment they propose is bound to yield data, maybe unequivocally interpretable, rigorously supported conclusions. But then I will pose the question, “Why do you actually want to do that particular experiment?” This forces them to begin to think on their own about precisely why they want to prioritize doing certain experiments and defer from doing others. Being able to distinguish the wheat from the chaff is a critically important taste in science and, to my mind, one that’s not easy to develop.