Arnold Levine got his start in science as a microbiologist, applying new tools from the nascent field of molecular biology to examine how viruses co-opt cellular machinery. Through his investigations of a cancer-causing virus, he became one of the first scientists to characterize the cell cycle regulator p53, and he went on to demonstrate its critical role in human cancers. More recently, Levine has taken original approaches to integrating physics and mathematics with biological research. 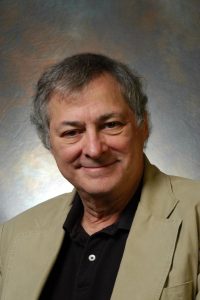 Levine is Professor Emeritus in the School of Natural Sciences at the Institute for Advanced Study, where he established the Simons Center for Systems Biology in 2004. He served on the Rita Allen Foundation’s Scientific Advisory Committee from 2000 to 2009, and chaired the committee for several of those years. Levine has also chaired the National Institutes of Health Commission on AIDS Research and the National Academies Cancer Policy Board. He currently serves as a scientific advisor to the American Association for Cancer Research and Stand Up To Cancer.

How did the discovery of the p53 protein come about, and how did it change scientists’ understanding of cancer?

I came in 1968 to Princeton [as an assistant professor of biochemistry]. By 1979, we were focused very heavily on the question: How does this [SV40] virus cause cancer? We knew the viral protein that caused cancer—it was called T antigen, or tumor antigen. We were constantly finding it associated with another protein, which was a cellular protein. That protein had a 53,000 [Dalton] molecular weight, and we named it p53.

At the time, everybody agreed this was a good target for understanding the cancer, but no one thought it had anything to do with human cancer. It caused cancer in hamsters. It was a peculiar side effect, but I fell in love with it and wouldn’t give it up. I tried to convince every new postdoctoral fellow or graduate student who came into my lab to work on this project.

By ’81 we had a portion of the gene cloned, and by ’83 we had the [full] gene. Then a big fight ensued. The gene we got was the normal copy of the gene, but there were two other labs that tied us in the cloning—everything was a race at that time. They thought it was an oncogene. They thought that when you put the DNA back into cells, it would cause cancer. We said, “No, it’s not causing cancer.”

Then a wonderful graduate student named Phil Hinds, who’s now at Tufts University School of Medicine, and a postdoctoral fellow named Cathy Finley took our copy of the DNA and [another lab’s] copy of the DNA—theirs would cause cancer and ours would not. They mixed the two and put them in cells, and the cells never got cancer. So this was, for the first time, an indication that p53 was a tumor suppressor gene. By ’89 we had published that it was really a tumor suppressor gene. At that moment in time, it all fell in place. Several other labs started to find the same thing.

By ’92, the first families to inherit a mutation in p53 were reported, and it became more and more apparent that p53 was the single most common mutation in human cancer. So it not only was contributing to some cancers—it was probably contributing to all cancers, and it was fundamental to understanding cancers. Furthermore, there were 500 or so families in the United States that inherited this gene, and they all developed cancers. I started to meet some of these families, and it became very personal at that point, to really try to find out what this thing, p53, does.

The field has exploded: there are 75,000 papers and thousands of investigators who work in this area. The field is overwhelming in many senses. But it’s the center of what cancer biology is, and it never stops. It just keeps getting more and more wonderful.

How is your work at the Simons Center bringing different disciplines together, and how will that shape the future of research?

When I first came to the Institute for Advanced Study, it was my dream at the beginning that we would take an area of mathematics and apply it to biology in a unique way, and it would inform us a lot about biology. But more than that, we would run into problems in this process, where we’d have to go back to the mathematicians, and the mathematicians would pioneer new mathematics because of the biological problems. In other words, it would go both ways: biology would inform mathematics about what direction to go in, and mathematics would inform biology about a useful way to analyze data.

And we found that in an area of topology called persistent homology. Four years ago, we published a paper [with Stanford University mathematician Gunnar Carlsson] where we uncovered a new kind of breast cancer, a very benign kind and really interesting kind, and it was all because of this analysis. Then one of my postdocs here took that and extended it, and applied it to influenza virus mutations, and uncovered a new set of information that made it fundamentally clear that this was going to be useful. He’s kept going on this and has persisted in many new applications.

How did you first become involved with the Rita Allen Foundation?

When I was at Princeton I got to know an awful lot of people in town, especially alumni, and then I met Mosie [Moore Gates, Jr., Director Emeritus and former Chair of the Rita Allen Foundation Board of Directors]. He invited my wife and me to his eating club, and we had some social evenings. Then Mosie told me about the Rita Allen Foundation, which seemed to be run out of his house. It wasn’t a foundation in the sense of the Rockefeller Foundation or the Ford Foundation, which was my vision of a foundation.

But he asked me if I’d help, and I agreed. I began to realize that [the Foundation] had supported some of the best people in the country. Suddenly it was a serious obligation to be on the Scientific Advisory Committee, and then to chair it, because the history of the Foundation was so distinguished, even though it was like stealth in the field. What Rita Allen had that no one else seemed to have was support for young assistant professors.

I think it was a very powerful concept, because in the early days when I was young it was pretty easy to get a first grant, but today it’s really tough. As such, [the award] has become more and more important with time. But it was always important in the sense that it gave freedom to young people. The young people are the ones with original ideas, but you wouldn’t have time to apply your original ideas if you were always worried about renewing a grant.

How would you describe the process of selecting Scholars?

You look for ideas that are original, because original ideas are always at a premium. It’s always wonderful when you see one and you hadn’t thought about it. You get smarter when you read it. [At first] I wasn’t sure what you’d get from an interview. But it turns out that once young people start talking about their science, they forget that they’re afraid or intimidated by the group around the table, or that this is an important thing for them. They just go into a zone of science.

“You look for ideas that are original, because original ideas are always at a premium. It’s always wonderful when you see one and you hadn’t thought about it. You get smarter when you read it.”

Suddenly you can see how this person reasons at blackboard. It’s a whole set of new questions. You make an objection, and they tell you why it’s not correct. Or you make an objection, and they say, “Yes, that’s true, but…” It just opens up the logic trains in their head, the depth at which they understand their subject and the excitement they’re feeling about moving ahead. Those are things that you don’t get from a paper.

In your view, what is most significant about bringing together all the Rita Allen Foundation Scholars for a 40th anniversary meeting?