Hao Wu was a medical student in Beijing when she first saw the images that would change the course of her career. At an international biochemistry meeting, Michael Rossmann of Purdue University presented the intricate three-dimensional structures of viruses that his group had elucidated using X-ray crystallography. 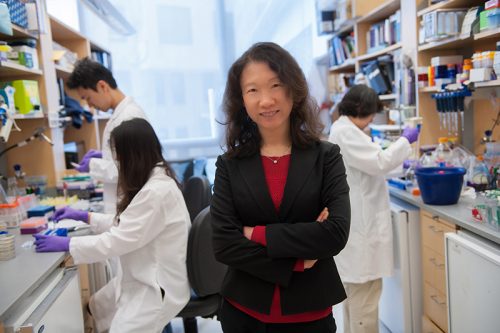 “At the time, I actually didn’t know what X-ray crystallography meant, but that really sparked my interest,” Wu recalls. She learned that the technique involved illuminating protein crystals with beams of X-ray radiation, and then mathematically analyzing the beams’ diffraction patterns to deduce the arrangements of atoms in the protein. “Instinctively, I thought this could be a really good fit for me, because of my interest in math and physics,” she says.

Wu was so enamored of the idea that she left medical school and moved to the United States to pursue a Ph.D. with Rossmann, who had recently become known for producing the first atomic-resolution structure of an animal virus—a type of rhinovirus that causes the common cold. Wu herself tackled the structure of canine parvovirus, which can lead to serious disease in puppies (although animals are now commonly protected by a vaccine).

Wu and Rossmann examined the architecture of the 60 individual coat proteins that form the canine parvovirus’s icosahedral shape—a soccer ball-like structure with 20 flat surfaces. Their work helped to illuminate how viral particles are put together within host cells, including how coat proteins interact with viral DNA as it is packaged inside an assembling protein shell.

Fascinated by the power of structural studies to reveal new facets of biological activities, Wu continued to investigate protein architectures as a postdoc in the laboratory of Wayne Hendrickson at Columbia University (where 2003 Rita Allen Foundation Scholar Christopher Lima also conducted postdoctoral research). Wu and her colleagues mapped the structure of human chorionic gonadotropin (hCG), a hormone that triggers the production of progesterone during early pregnancy. She also studied the anatomy of CD4, an immune receptor involved in HIV infection, and showed how CD4 proteins may form pairs when mediating the recognition of foreign molecules by immune cells.

After joining the faculty at Weill Cornell Medical College, Wu turned her attention to tumor necrosis factor-receptor-associated factors (TRAFs), key components of cellular signaling pathways that regulate immune responses and are inappropriately activated in autoimmune conditions such as rheumatoid arthritis and Crohn’s disease. Wu’s team identified unique attributes of TRAF6 and explored its potential as a therapeutic target for osteoporosis.

Wu became a Rita Allen Foundation Scholar in 2002, and began to investigate how a viral protein called p35 prevents cells from committing suicide (apoptosis)—a response meant to purge the body of infected cells. Understanding the activities of p35 has helped researchers to examine the involvement of apoptosis in various disease processes. Wu’s research group also uncovered an interaction between amyloid beta, the main protein found in the brain plaques of Alzheimer’s patients, and a particular alcohol dehydrogenase enzyme. Drugs that inhibit this interaction are now being developed as potential Alzheimer’s therapies. 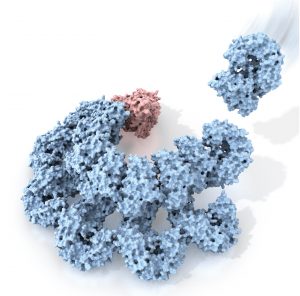 In 2012 Wu moved to Harvard Medical School, where her team has characterized the complex, higher-order structures of “inflammasomes”—multiprotein complexes that assemble in response to the recognition of, for example, proteins from bacterial pathogens. Once assembled, inflammasomes initiate an array of responses that may lead to cell death, the production of antibacterial molecules and the influx of immune cells to the site of infection. To investigate these elaborate bundles of proteins, Wu’s group has begun to use cryo-electron microscopy, a structural imaging technique that, in contrast to X-ray crystallography, does not require the laborious process of producing protein crystals.

“We saw that these intracellular signaling molecules were forming very large higher-order structures…this kind of signaling complex has now established its role as the overarching principle for innate immune responses.”

In light of emerging knowledge about inflammasomes and other innate immune signaling complexes, Wu and her colleagues have challenged traditional views of cellular signaling mechanisms as linear pathways. They argue that the assembly of multiprotein complexes may enable immune responses to reach a critical threshold, causing cells to unleash powerful inflammatory signals. Wu’s team is now beginning to apply this framework to drug discovery studies, for which she received a 2015 Director’s Pioneer Award from the National Institutes of Health.

Here, Wu reminisces about getting her start as a scientist, and explains shifting perceptions of cellular signaling.

What was your first research experience?

In medical school, I worked with an immunologist. Maybe that’s why I’m still studying immunology—it got me very interested in all of these different immune diseases. At the time, I worked on lupus, a chronic autoimmune disease that causes inflammation in many of the body’s tissues. We isolated blood samples from lupus patients and from normal donors—actually, from ourselves! Then we analyzed them using what I think was the very first flow cytometer in China—a machine that can sort cells based on defined molecular properties. We actually helped install the machine.

We were able to see a difference between immune cells with the CD4 surface protein in normal individuals versus lupus patients, and we tried to provide some insights into the disease, so to me that was all extremely interesting. Later I ended up continuing this interest by studying cellular immune responses.

How has your work led to new ideas about how cells propagate immune signals?

We and other researchers have discovered these so-called “higher-order structures” involved in mediating signal transduction. In a classical signaling pathway, you have a receptor protein, which gets activated by a ligand molecule, and that causes some kind of conformational change in the receptor. That change then propagates the signal to the inside of the cell, where another protein is activated, which triggers second messenger molecules that can set off broader responses. So that’s what we were thinking when we started studying the receptors of the immune system, such as the TNF family of receptors and Toll-like receptors.

But as we were applying structural approaches to these studies, we realized that we did not see a similar motive signaling process. Instead, we saw that these intracellular signaling molecules were forming very large higher-order structures. And more recently we discovered that these are filamentous structures that polymerize into a helical symmetry, that there are multiple kinds of structures within a given signaling complex, and that together they form micron-sized spots or puncta inside the cell—which you can see even with a light microscope. That’s what I call signaling machinery, or a “signalosome” that mediates the transmission as well as the amplification of the signal. Since our initial discovery, this kind of signaling complex has now established its role as the overarching principle for innate immune responses.