Johanna Joyce’s first task as a research scientist was to clone a chicken gene. This was in the 1990s, when she was an undergraduate at Trinity College Dublin. At the time, she says, “cloning a gene was a big deal—it seems trivial now.” 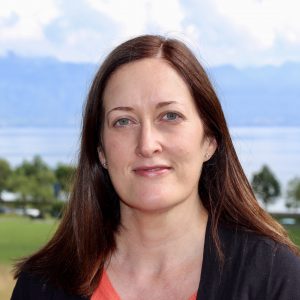 Her goal was to isolate the gene encoding serum amyloid A, a liver-produced protein that helps to regulate inflammation, for a cross-species comparison study. She ended up cloning the gene for ovalbumin, the most abundant protein in egg white. “That was a bit disappointing,” she recalls with a laugh. “It was not what I had set out to do, but at least I went through the process of cloning genes and looking for homologs in other species—it was certainly an educational experience.”

Joyce later became fascinated with genomic imprinting, a process by which genes are regulated differently depending on their inheritance from the mother versus the father. In Paul Schofield’s lab at the University of Cambridge, she conducted doctoral research on the role of imprinting defects in Beckwith-Wiedemann syndrome, which causes large organ and body size and can lead to childhood tumors.

As Joyce began to further explore the relationships between genomic imprinting and tumor development, she decided that she “wanted to think more holistically about cancer,” she says. Since then, she has focused her research on understanding the tumor microenvironment—looking beyond cancer cells themselves to investigate how neighboring cells of the immune and vascular systems impact the progression of tumors and their responses to therapies.

Joyce pursued a postdoctoral fellowship at the University of California, San Francisco, with Douglas Hanahan (now at the École Polytechnique Fédérale de Lausanne in Switzerland). In Hanahan’s lab, she studied mouse models of pancreatic and cervical cancer, and found that enzymes called cathepsin cysteine proteases showed increased activity during tumor invasion and angiogenesis (the growth of new blood vessels); this work also suggested that inhibiting cathepsins could interfere with tumor growth.

“There are many cells within the brain that you don’t find elsewhere in the body, and how they interact with, and potentially influence, the outcome of cancer cells in the brain, is something that we really wanted to delve deeply into. We see this as an opportunity to make an impact and learn something that was never known before.”

In December 2004 she joined the faculty of Memorial Sloan Kettering Cancer Center, and the following year she became a Rita Allen Foundation Scholar. The award helped to support comprehensive molecular and cellular analyses of the tumor microenvironment, which led Joyce and her team to delve deeply into the roles of macrophages (from the Greek for “big eaters”), innate immune cells that can have profound effects on the dynamics of cancer—in part by producing cathepsin enzymes. Her research provided some of the first evidence that macrophages function to protect breast cancer cells from chemotherapy treatments, and has informed combination therapy approaches.

Joyce’s lab has expanded this work to examine how macrophages impact a variety of tumor types and their responses to therapy, including a number of notable studies on difficult-to-treat brain cancers. Her team recently demonstrated that a strategy to “reeducate” macrophages, informed by gene expression profiling, could help to prevent the long-term recurrence of tumors in a mouse model of glioblastoma. “Interestingly, we found that the resistance [to therapy] didn’t happen at the level of the cancer cells, but rather at the level of the microenvironment,” Joyce explains. “So you target macrophages and you get this adaptive resistance response, which is also mediated by changes in the brain microenvironment. I think finding anything that’s new and unexpected—not necessarily that hypothesis that you went in to test—is what makes science fascinating.”

In 2016 Joyce moved from Memorial Sloan Kettering to the University of Lausanne in Switzerland, where she is a professor at the Ludwig Institute for Cancer Research. Her research group is now “doubling down in our efforts to understand both primary and metastatic brain malignancy,” she says. Here, Joyce recounts critical experiences and questions that have motivated her work as a scientist.

Did you have any early influences that put you on the path to a career in science?

I always knew from my early teens that I wanted to be in science, so it must have been innate—I didn’t ever question it. I had a very good chemistry teacher, Mr. Bennett, and I think that he was instrumental in leading me in that direction. There were some of us in the class [for whom] the set material for chemistry in high school wasn’t really challenging enough. He would set up separate exercises for us that pushed us to go further. He was always accessible, always friendly, and just very supportive. He clearly loved science and loved to share his enthusiasm for it, which had a very positive effect on me.

What made you decide to focus much of your work on brain cancers, and what are some of the challenges of this research?

This was a decision I made not too long after I started my lab at Sloan Kettering. I realized then that studies of the tumor microenvironment in the brain specifically were very limited compared to other organ sites that many people in that field were working on, such as the breast, for example. Brain tumors are particularly challenging from a therapeutic perspective. Survival rates for many brain tumors are measured in a matter of months, not even years. So we thought this was a challenge we wanted to take on—to really try and understand many of the unique features of the brain tumor microenvironment. There are many cells within the brain that you don’t find elsewhere in the body, and how they interact with, and potentially influence, the outcome of cancer cells in the brain, is something that we really wanted to delve deeply into. We see this as an opportunity to make an impact and learn something that was never known before.

One big challenge is the presence of the blood–brain barrier. This exists to protect the brain—it’s extremely important of course, but it makes [cancer treatment] challenging because the vast majority of therapies that are available don’t cross the blood-brain barrier. This means that you have to be very creative in designing strategies to help therapeutic molecules to cross over into the brain to have their effect. There are many people working on this, from medicinal chemists to cell biologists, so I hope that as a community we can make some meaningful advances in the coming years.

As you’ve learned more about the various roles of the tumor microenvironment, which of your findings have been most surprising?

Probably the most surprising finding was from a study that we published in 2013. We had found in animal models, and it had been well known in patient samples, that as gliomas [brain cancers] become more aggressive there are an increasing number of macrophages within those tumors. So we thought we would try and target those cells. We initially set out to try and kill macrophages within brain tumors. We got very striking effects on tumor regression, and dramatically enhanced survival of the animals. When we looked in the tumor we fully expected to see that the macrophages would be at least reduced in numbers, if not gone. But we found that there was no change in the numbers of these cells. This was totally unexpected, because in the normal brain these cells were depleted [by our targeted treatment].

That led us to think about how [the macrophages were] surviving in the context of this drug that’s supposed to kill them, and clearly did kill them in the normal brain and other tissues in the body. If they’re not being killed, how are we seeing these striking effects on tumor shrinkage and extending survival in these animals? So then that led us to look more deeply at the phenotype of these macrophages.

We found that, rather than depleting these cells, we were reeducating them. They became highly phagocytic. They were eating the tumor cells within these treated brains, and we think this contributed toward the rapid regression that we saw. That contributed to an emerging concept that has been expanded over the subsequent years in the field: that maybe depleting [tumor-associated immune cells] is not necessarily the best approach. Trying to change their phenotype, trying to redirect them back to being more similar to their normal counterparts, is a more sustainable approach in the long term, and one that we continue to actively pursue in our research on brain tumors.