Peter Reddien delights in reviving what he calls “one of the grand problems of biology.” He applies modern molecular tools to study regeneration in planarian flatworms—a phenomenon first documented by scientists as early as 1766.

These freshwater creatures, which are a few millimeters long, can replace a severed head or tail, and can even regenerate a whole organism from a bit of tissue one three-hundredth the size of the original animal. “Just hearing about the feats that these animals are capable of—it easily captures one’s imagination,” he says. 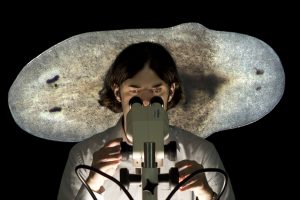 Since Reddien entered the field in 2002, he has made strides in revealing the nature of planarians’ regenerative cells and the molecules that provide critical “positional information” that guides the cells’ responses to injury. Because many similar molecules operate in other animals, including humans, these discoveries have broad relevance for understanding stem cell biology, wound healing and the growth of cancers.

Reddien, a professor of biology at the Massachusetts Institute of Technology, long aspired to become a physicist or astronomer; growing up, he became engrossed in reading about red giant stars and the Voyager space probes. He studied physics at the University of Texas at Austin, but switched his major to molecular biology after a required course in the subject showed him a world “full of creative, remarkable experiments, and also full of mysteries that hadn’t been answered yet.”

Captivated by the power of genetic approaches to biological problems, Reddien decided to pursue a Ph.D. at MIT. In Robert Horvitz’s lab, he studied the roundworm C. elegans, a well-established model organism, and helped to elucidate the regulation of programmed cell death during animal development. The experience left him wondering what questions biologists might be neglecting amid their intense focus on just a few idiosyncratic model species.

A search of the scientific literature led him to the overlooked realm of planarian regeneration, and to a postdoc position at the University of Utah with Alejandro Sánchez Alvarado (now at the Stowers Institute for Medical Research). Unlike C. elegans and Drosophila, planarians were not amenable to disrupting gene function through classical genetic mutation approaches. But Sánchez Alvarado and a colleague had recently discovered that RNA interference (RNAi), a technique pioneered in C. elegans by Craig Mello and Andrew Fire (a 1989 Rita Allen Foundation Scholar), could be used to silence genes in the planarian Schmidtea mediterranea. In Sánchez Alvarado’s lab, Reddien led an RNAi screen of more than 1,000 planarian genes, identifying 240 genes with potential roles in regeneration, and investigated the effects of silencing a specific regulator that operates in planarian stem cells.

“We’re limited to studying the biology well represented in those [model] organisms that are the result of their own evolutionary history. We might be getting a little bit skewed in our perspective, and we might be missing big problems.”

Reddien returned to MIT to establish his own lab in 2005, and the following year he received a Rita Allen Foundation award, which helped him launch new explorations into the molecular basis of regeneration. His team uncovered a gene that controls whether a planarian regenerates a head or a tail, and showed how other polarity regulators reset their expression patterns in response to wounding. In 2011, Reddien’s group published a key insight into planarians’ regenerative capabilities: Adult flatworms, they found, contain “pluripotent” stem cells that can become any type of tissue. In most animals, only embryos possess pluripotent stem cells, while adults harbor various specialized stem cells that can only differentiate into a limited set of tissue types. 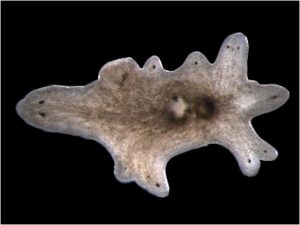 Recent work in Reddien’s lab has addressed how these stem cells determine their position within the animal to maintain and regenerate appropriate cell types. A single-cell analysis of gene expression led them to conclude that muscle cells are the source of positional signals. These signals can influence stem cell fate, determining, for instance, which type of epidermal cells they become. Reddien calls these findings “a big surprise,” which “led to our idea that the planarian muscle acts in a GPS-like coordinate system to specify body location.”

Here, Reddien relates his early encounters with the enigmas of regeneration, and shares some of his lab’s current efforts to further decipher the process.

What led you to focus your work on understanding regeneration?

Throughout my Ph.D. I was thinking broadly about areas of biology that would be of interest for me, and thinking about my future career. I started realizing that a lot of what we do as graduate students and postdocs is work within some existing paradigm that prior generations have built, and now it’s a well-functioning enterprise that enables new people to join and pursue their ideas within that paradigm.

For example, model organisms studied by many, many people are Drosophila, C. elegans, mouse, zebrafish … I started thinking that, if one wanted to take this approach to biological problems—taking an organism that displays the biological process of interest in a relatively simple form, where you can study it readily in the lab—then what biases have been introduced by having a small number of these organisms available for study in the community? In fact, if you look at just the genetic analysis of invertebrate model systems, C. elegans and Drosophila, we’re limited to studying the biology well represented in those organisms that are the result of their own evolutionary history. We might be getting a little bit skewed in our perspective, and we might be missing big problems.

I started reading about what biologists were interested in before these model systems dominated the field. And my sights were set, pretty rapidly, on the problem of animal regeneration. I was reading old books in the basement of the MIT library, looking for information about different organisms, their lifecycles and regeneration times. I encountered the old literature on planarians, which I just was amazed by, and I wondered, is anyone working on these animals?

They were not an extensively studied molecular genetic system, but there were people working on them around the world, and I found Alejandro Sánchez Alvarado … we really hit it off. When we were having our first dinner and I was talking about my process of looking in the library at different regenerative organisms, he said it sounded like we were separated at birth! He was moving to the University of Utah to set up his lab, and I went there right after he had moved there to start my postdoc.

I have to say, I love what we’ve done and what we’re doing. I couldn’t have hoped for a better adventure with it. We continue to find key pieces of the puzzle … it’s an incredibly exciting process and continues to be.

What are the next big questions your lab is pursuing?

We’re also interested in exploring how information about the nature of the injury is communicated to the stem cells that are making that missing structure. So we’re studying how wounds determine whether there is something missing and what is missing—that’s a major area of focus for the future.