As part of their shared commitment to public-interest media that advances knowledge and understanding of science, the Rita Allen Foundation and public media producer WGBH Boston have named the first Rita Allen Fellow for Science Communication. The fellowship is designed to develop new approaches to science literacy through a variety of media. 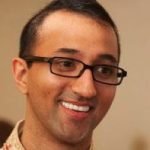 Adnaan Wasey, an award-winning producer and editor with more than a decade of experience in TV, radio and digital media, and a background in research science, has been selected from among more than 100 applicants for the inaugural fellowship. He will spend a year working from WGBH, collaborating with the flagship public media science series NOVA, as well as other science projects and organizations inside and outside of WGBH, in a bid to reach and engage new audiences.

“With his background in both science and media, along with his innovative approaches to creating new content and formats, Adnaan Wasey is ideally suited to initiate the fellowship,” said Elizabeth Christopherson, President and Chief Executive Officer of the Rita Allen Foundation. “Expanding science awareness and understanding is tremendously important for the future success of our nation and all its people, and we look forward to the impact that Adnaan’s work will make during the fellowship year, and beyond.”

Wasey was previously Executive Producer of POV Digital, where he led the production of interactive video for social platforms and mobile devices, and where he spearheaded the media incubator POV Lab. Prior to that, he was Senior Editor with the community news startup DNAInfo; Web Editor for the public radio program The Takeaway, a co-production of WNYC, PRI, The New York Times and WGBH; and Interactives Editor for The NewsHour with Jim Lehrer on PBS. He earned both a Bachelor of Science degree in Engineering Chemistry and a Master of Science degree in Chemistry from Queen’s University in Canada. Wasey has been honored by the Emmy Awards, Webby Awards and Telly Awards, among others.

“We had a large and outstanding field of candidates for the fellowship, which is a positive reflection of the heightened awareness of the importance of science literacy across the country,” said John Bredar, Vice President for National Programming at WGBH. “Adnaan has just the right background and experience to drive more innovation and experimentation in this area, working alongside our NOVA team, other WGBH productions, and non-GBH science platforms to reach new audiences for science media.”

The candidates were reviewed by a team at WGBH and a steering committee that included scientists, journalists and communication leaders from universities across the country. The fellowship will begin in January 2018.

WGBH Boston is America’s preeminent public broadcaster and the largest producer of PBS content for TV and the Web, including Frontline, NOVA, American Experience, Masterpiece and Antiques Roadshow, as well as lifestyle and children’s series. WGBH also is a major supplier of programming for public radio, and a leader in educational multimedia for the classroom. WGBH is a pioneer in technologies and services that make media accessible to those with hearing or visual impairments.