Joshua Mendell launched his research career with a junior high science fair project on DNA mutation rates in bacteria. A graduate student who worked with his father, Jerry Mendell, a neurologist at The Ohio State University, assisted him with his project and taught him the basics of molecular biology. “Performing this project was an eye-opening experience that introduced me to the world of molecular biology and laboratory research. I was hooked immediately,” Mendell recalls. 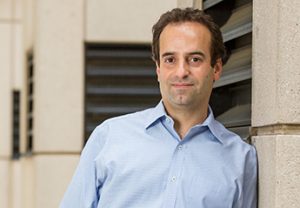 During high school, a National Science Foundation summer program gave him the opportunity to work in research labs at Ohio State. Mendell enjoyed exploring the genetic underpinnings of plant-pathogen interactions, and of neuromuscular diseases in humans. He went on to study biology at Cornell University, and then pursued an M.D.-Ph.D. at Johns Hopkins University.

Today, Mendell leads a team conducting research on the biology of RNA in his own lab at The University of Texas Southwestern Medical Center. A trailblazer in determining how microRNAs influence cancer, he continues to demonstrate the tenacious curiosity that first led him to work in the lab.

“I tell all my students and postdocs that if we’re not asking hard questions that are challenging and frustrating to address, we are probably not doing the kind of science that will lead to fundamental breakthroughs,” he says. “Important answers come from asking really tough questions, so intrinsically, the work is always challenging. If I ever feel that our science is incremental, then there’s something fundamentally wrong with our approach, and we need to challenge ourselves to find another really groundbreaking question.”

Mendell began to focus on the biology of RNA—the intermediary molecule that allows the instructions in DNA to be read by the cellular machinery that makes proteins—at Johns Hopkins. The production and regulation of RNA molecules are fundamental cellular functions, but their details remain poorly understood. “I’ve always been attracted to more enigmatic areas in the field of molecular biology,” Mendell says.

In doctoral and postdoctoral research with Harry Dietz, he tackled the enigma of RNA quality control. “When genes are expressed…cells are able to monitor whether the RNA that’s produced from the gene is made correctly,” Mendell explains. “If it is not made correctly there’s actually a disposal pathway that gets rid of that RNA, but how that process worked at the molecular level was very mysterious.” He studied the fates of RNA molecules with “nonsense” mutations, or premature “stop” signals that, if left unchecked, cause cells to produce incomplete, nonfunctional proteins.

Mendell started his own laboratory at Johns Hopkins in 2004, and set out to investigate noncoding RNAs. Emerging evidence showed that cells produce many RNA molecules that do not encode proteins, but nevertheless play key roles in regulating cellular processes in both normal physiology and disease. In particular, Mendell was intrigued by microRNAs, short molecules that can silence the expression of specific genes, and wanted to explore their involvement in cancer. He recalls that the Rita Allen Foundation award, which he received in 2006, gave him “confidence that I could have credibility in a cancer-related field” and allowed him to pursue research with potential clinical relevance.

“When I launched my lab I decided to explore the regulation and function of microRNAs in mammalian cells. I thought maybe we would dabble a little bit in this field, but this area was so ripe for discovery that it immediately took over everything we were doing.”

Mendell’s group examined microRNAs regulated by the classic tumor suppressor protein p53. They focused on a microRNA that is often downregulated in human cancers, miR-34a, and found that it controls the expression of genes involved in cell cycle progression, DNA repair, and other functions critical to curbing the growth of cancer. They also showed that Myc, another major cancer regulator, activates a critical microRNA gene that promotes cancer and represses the expression of a host of microRNAs that suppress tumor formation. Restoring the expression of these Myc-repressed microRNAs limited tumor formation in a mouse model of lymphoma. In a follow-up study, Mendell and his colleagues tested one these microRNAs as a therapeutic intervention in a liver cancer model. 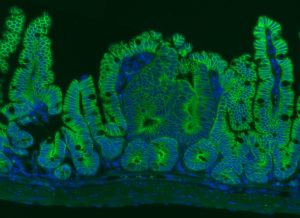 Rita Allen Foundation Scholar Joshua Mendell has studied the involvement of microRNAs in cancer. His lab found that a microRNA called miR-26 could suppress the formation of intestinal tumors—shown here in a mouse model. Intestinal epithelial cells are labeled in green, and cell nuclei are labeled in blue.
(Image: Lauren Zeitels)

In addition to further research on microRNAs in cancer, more recently his lab has also been exploring other types of noncoding RNAs. They discovered that a long noncoding RNA activated by DNA damage (NORAD) is essential for maintaining a stable number of chromosomes in cells, and characterized a novel mechanism for this activity. And in work published earlier this year in Nature, Mendell’s team used a high-throughput screening technique to identify factors important for the gene-silencing functions of microRNAs. They uncovered a previously unknown mechanism that regulates the activity of the Argonaute 2 protein, which helps microRNAs silence their target messenger RNA molecules (gene transcripts).

Mendell joined UT Southwestern as a professor of molecular biology in 2011, and became a Howard Hughes Medical Institute Investigator in 2015. Here, he shares the origins of his enthusiasm for microRNAs and his optimism about their therapeutic potential, and discusses new directions in his research.

When I was finishing my M.D.-Ph.D. degree and preparing to start my own laboratory, it was clear that the next frontier in RNA research would be the potential role of so-called noncoding RNAs. The protein-coding genes in our genome have been studied since the beginning of molecular biology. But it turns out that the protein-coding genes constitute less than 3 percent of our genome, and, in fact, a larger fraction of our genome produces other kinds of RNAs that do not encode proteins.

The class of noncoding RNAs that I got excited about as a way to get into this field was microRNAs. They’re on the order of 21 or 22 nucleotides long, as opposed to typical messenger RNAs, or protein-coding RNAs, which are thousands of nucleotides long. In the early 2000s there was virtually nothing known about microRNA functions in mammals. There were a few microRNAs that had been studied in model organisms like Drosophila and C. elegans. Interestingly, the functions linked to these microRNAs had connections to cancer biology, in the sense that they were regulating fundamental cellular processes that often go awry in cancer, like cellular differentiation, cellular proliferation and apoptosis. There’s a very strong tradition of identifying genes in those model systems that ultimately prove to function similarly in human cells, so I thought it was possible that microRNAs could play a role in cancer biology.

When I launched my lab I decided to explore the regulation and function of microRNAs in mammalian cells. I thought maybe we would dabble a little bit in this field, but this area was so ripe for discovery that it immediately took over everything we were doing. Every rock we turned over we’d find something interesting, because there was almost nothing known.

What’s the status of microRNAs as potential therapies for cancer or other diseases?

Multiple companies are pursuing therapies based on modulating microRNA levels—either inhibiting microRNAs, which can be done with therapeutic oligonucleotides, or delivering microRNAs. In addition to our [2009] study on liver cancer, we’ve done additional experiments that demonstrated similar results in other types of cancers with other microRNAs. I think this strongly suggests that if we can modulate the levels of microRNAs, we can achieve very good therapeutic responses in cancer and potentially other diseases.

In fact, a company called Santaris Pharma completed a very successful clinical trial in which they inhibited a microRNA as a therapy for hepatitis C. These findings provided excellent proof of concept that microRNAs represent actual therapeutic drug targets that can be exploited with great efficacy in patients.

And there are other trials going on. It takes time to get from the type of laboratory research that we do to an actual therapy, but I’m very encouraged that this type of work is being continued and pursued in the biopharmaceutical realm now.

Where are you going next with your research, and what are some of the challenges?

I am very interested in continuing to understand how RNA biology impacts disease-relevant processes, so we’re continuing our research to study the functions of microRNAs in whole animals. When we do this, we inevitably uncover unexpected functions of these molecules, revealing entirely new biology to study. More broadly, we are studying other types of noncoding RNAs…the mammalian genome produces thousands of RNAs that don’t make proteins, and there’s a lot of debate in the scientific community about whether these RNAs are functional, or whether they are byproducts of noisy transcription.

This is an area that is going to require very detailed study of these individual RNAs in a very rigorous way. In addition, new, creative approaches to study noncoding RNAs in a more high-throughput manner will be critical to identify those that have important functions. We’re certain that noncoding RNAs play important roles in disease, but identifying the important ones is like finding a needle in a haystack. Although these studies will be challenging, I’m hopeful and optimistic that these efforts will reveal, not only new and exciting fundamental biology, but also unanticipated opportunities to develop new therapies for diverse diseases.