Providing more information is rarely enough to change people’s minds when scientific findings run counter to their beliefs and values.

This is one overarching conclusion of a committee of scientists and science communicators convened by the National Academies of Sciences, Engineering and Medicine to assess the current state of knowledge about effective science communication. Despite a common assumption that people’s choices would be more consistent with scientific evidence if only they were better informed—the “deficit model” of science communication—research points to the need for science communicators to take into account a complex system of goals, needs, perceptions, values and beliefs as they shape their approach in different contexts. 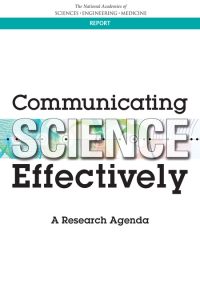 The committee’s report, “Communicating Science Effectively: A Research Agenda,” now available as a public draft, synthesizes a wide range of findings from research on communicating about science. It also points to specific targets to continue to build knowledge about communicating science effectively, including:

“Science communication is a complex task and acquired skill,” committee Chair Alan Leshner said in announcing the report. “There is no obvious approach to communicating effectively about science, particularly when it is a contentious issue such as climate change, stem cells, vaccines or hydraulic fracturing. More research needs to be conducted to strengthen the science of science communication and work toward evidence-based practices.” Leshner is Chief Executive Officer Emeritus of the American Association for the Advancement of Science.

Writing in The Conversation (which is supported by the Rita Allen Foundation), committee Vice Chair Dietram Scheufele of the University of Wisconsin–Madison and committee member Andrew Maynard of Arizona State University conclude: “This will not be easy. But the alternative—slipping further into a post-truth world where disdain for evidence creates risks that could be avoided—gives us little option but to dig deeper into the science of science communication, so that science and evidence are more effectively incorporated into the decisions people make.”

The Rita Allen Foundation supported the work of the committee along with its grant partner Climate Central, a nonpartisan group of journalists and researchers, who will work to apply the findings and learn more. The committee was also supported by the Burroughs Wellcome Fund, the Gordon and Betty Moore Foundation, the David and Lucile Packard Foundation, and the Hewlett Foundation.

The National Academies of Sciences, Engineering and Medicine are private, nonprofit institutions that provide independent, objective analysis and advice to the nation to solve complex problems and inform public policy decisions related to science, technology and medicine. The Academies operate under an 1863 congressional charter to the National Academy of Sciences, signed by President Lincoln.