In 1990, Senthil Muthuswamy was a young graduate student in biology at McMaster University in Hamilton, Ontario. He had just moved to Canada from his native India after completing a bachelor’s degree in agricultural sciences at the Tamil Nadu Agricultural University and a master’s degree in genetics at the Indian Agricultural Research Institute in New Delhi.

Although he had enjoyed plant genetics, Muthuswamy became more interested in mammalian biology and embarked on a major transition in his training—and in the process found a new research interest he has been pursuing ever since.

“I was completely clueless about animal physiology and molecular biology,” he recalls. “So I took two pathology courses, and that completely changed my perspective.” Learning to decipher the differences between healthy and cancerous tissues gave him a cell structure-centric view of cancer. “I realized that cancer is a disease of loss of tissue structure and organization,” he says. “That is the cardinal feature used by pathologists to define a disease state, whether it is cancer or anything else.” 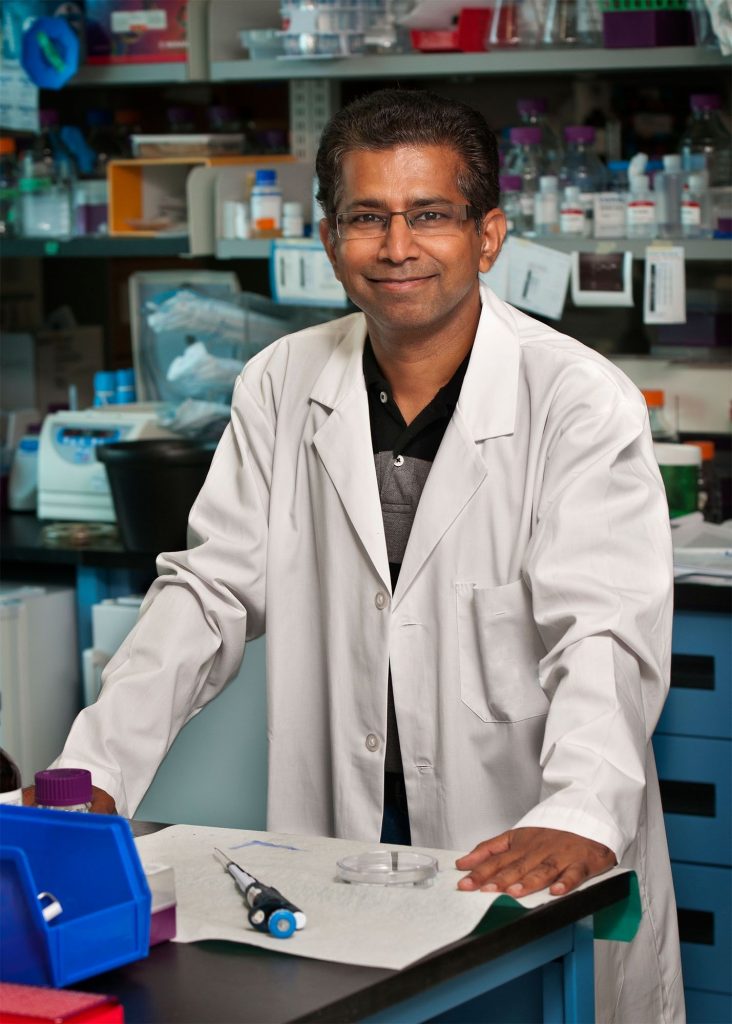 At that time, most cancer researchers, using tumor cell lines, were focusing on signaling pathways that went awry in cancer, inducing unchecked proliferation. But Muthuswamy wanted to study how cancer caused the cellular changes he had seen on pathology slides of tumor samples. He joined the laboratory of William Muller, who was then establishing mouse models of breast cancer. Focusing on the role of the Src enzyme in initiating tumors, Muthuswamy and his colleagues showed that in transgenic mice, activation of Src is necessary to induce mammary tumors. He then further teased out the signaling pathway of Src-activated mammary tumors, including the protein’s interaction with the oncogene HER2 (also known as Neu) during tumor formation in mice.

Despite working on tumor mouse models, Muthuswamy was focusing on how genetic mutations perturb intracellular signaling, rather than on cell biology. He didn’t forget the structural changes that tissues undergo as cancer develops and progresses.“What I learned in that pathology course still stayed with me,” he says.

Muthuswamy pursued a postdoc with Joan Brugge, a cell biologist at Harvard Medical School. He recalls the conversation he had with Brugge when he first joined her lab: “We said, ‘We need to think about growing epithelial cells in three-dimensional cultures, so that we can really understand the tissue structure and how oncogenes disrupt this organization,’” he recalls.

Mimicking epithelial tissue structure in the lab was not a concept being seriously considered by the cancer research community, Muthuswamy says. Starting from scratch, he set up a new system in Brugge’s lab—clusters of mammary cells, called acini, cultured in three-dimensional basement membrane gels. He wanted to address how cell polarity is disrupted by oncogenes in epithelial tumors. “It was a slow process…there was a lot of self-doubt,” he says.

Muthuswamy and Brugge teamed up with Mina Bissell of the Lawrence Berkeley National Laboratory in California, one of the few cancer researchers who were using three-dimensional culture systems to address how tumor cells develop in the context of surrounding tissues and organs. Using this culture system, Muthuswamy and his collaborators demonstrated that two receptors overexpressed in breast tumors, EGFR and HER2, have different capabilities to induce mammary tumorigenesis in polarized cell cultures, while both receptors are equally important for transforming unpolarized fibroblasts into tumor cells.

“There was context-dependent biology that was unique for each receptor. We found evidence that HER2 could disrupt the apical base polarity of epithelial cells, while EGFR could not,”says Muthuswamy. The work was a proof of concept that a three-dimensional model system can provide insights into how signaling drives cancer that cannot be revealed by standard methods of growing monolayers of tumor cells in the lab.

“When I started my research program we were addressing something that was not commonly thought about as an important regulator of cancer biology, which is cell polarity. [With the Rita Allen Foundation award], the way in which we could address these questions without having to provide all the necessary initial evidence…was a big blessing for us.” 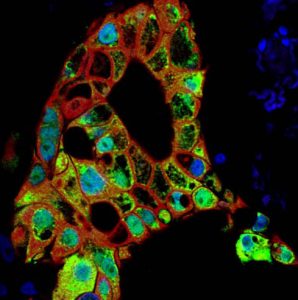 By the time Muthuswamy was looking to start his own laboratory, the cancer community “was welcoming to the idea of using three-dimensional epithelial cells to probe cancer biology, although this was not being done at most research institutions,” he says. Muthuswamy became an assistant professor at Cold Spring Harbor Laboratory in 2001, probing how HER2 disrupts cell polarity. He became a Rita Allen Foundation Scholar in 2004.

His research group showed that activated HER2 in epithelial cells immediately causes tight junction mislocalization, which perturbs the distribution of apical polarity proteins in the cells. Then, in 2006, they found that HER2 interferes with cell polarity by physically disrupting a complex called Par. “That was how we made the first connection between cell polarity proteins and oncogene signaling,” says Muthuswamy. His lab continues to address how oncogenes affect cellular polarity pathways and cellular architecture. Recently, his group has expanded three-dimensional culture systems to grow pancreatic tumor cells derived from patients’ surgical samples as three-dimensional tumor organoids.

Here, Muthuswamy describes the origins of his interests and expands on the importance of cell polarity disturbances in cancer.

When you were younger, who influenced you to pursue a career in biology?

My dad was a soil chemist, an agriculture professor, and I used to do work in his soil chemistry lab after school when I was in high school. I would do small things, like comparing the volumes of different soil samples depending on their composition. He really liked motivating his students toward science. There’s a long lineage of people who were trained under him at various levels. But my interest in biology came from my uncle, who is a pediatrician, and he continues to be a true inspiration for me. He instilled in me the idea that if you are really passionate about a problem, you should dedicate your life to studying it. That concept has stuck with me.

Is disturbance of cell polarity now seen as a major consequence, or even a hallmark, of cancer?

It is beginning to gain a lot of attention now. When I started my lab, cell polarity was not commonly thought about as an important regulator in cancer biology. Cell polarity is a property by which cells create asymmetry within themselves, whether that’s differential distribution of proteins or organelles or junction proteins. Cancer biologists accept and acknowledge that intracellular organization is lost in cancer cells, but the mechanisms by which this happens are not well understood. When I began my laboratory it was considered to be an extremely high-risk project, and the Rita Allen award was very helpful because it allowed me to ask these questions.

Now it is accepted that disruption of cell polarity is another arm of cancer biology that has not really been investigated well. What is really missing is whether this is a cause or a consequence of cancer. Data from our lab and others are beginning to suggest, in fact, that structural changes can be causal. Simple experimental systems, such as cells grown on a plastic dish, are poor models to study changes in cell polarity. In addition, it’s not a topic that is being widely investigated, and that is why it has not actually made an impact in the minds of [prominent cancer researchers] that it’s a hallmark of cancer.

It also depends on whom you ask. If you ask pathologists, they will tell you that cell polarity has an essential role in cancer—that if you do not see any changes in cell structure, then it’s not a disease state. There are still big unanswered questions in the field about what exactly is the role of cell polarity pathways in the process of cancer initiation. But our lab and others are beginning to find answers.

What aspect of your research is most exciting to you right now?

Science in my lab is really bubbling right now, and I have a great group of colleagues to work with—it’s fantastic. We’re focusing on how a polarity protein called Scribble regulates intracellular organelle biology. What we see is that polarity proteins are regulating organelle physiology and organelle biology, and in doing so they are regulating differentiation and stress adaptation by cells. Another focus is coming up with ways in which we can keep primary patient tumor cells alive in culture to test responses to drug combinations and use the information for making clinical decisions. This is really interesting, because for the first time in my academic career, we can do something that can directly help patients, which has really resonated with me.