Steven Altschuler began his journey into mathematics and science at an early age. Growing up in a household enriched by discussions of discovery and art, he naturally was drawn into these deep subjects.

“My father is an astronomer and I grew up in a house where I just assumed that everybody debated quasars over dinner,” Altschuler recalls of his childhood. “The journals sitting around the house were Science Newsand Scientific American. My mother is a musician, on the other hand. We had a nice balance between the subjects.”

This innate curiosity stayed with Altschuler as he transitioned to college. Encouraged by positive experiences he had in biology as a high school student, Altschuler set his sights on continuing in biology as a major at the University of Pennsylvania. A conversation with a crystallography professor in the chemistry department, however, changed Altschuler’s path. 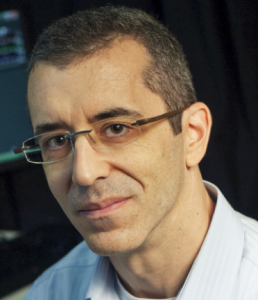 “One of the faculty members said my knowledge of mathematics was appalling, and he was correct. So, I started catching up on math,” Altschuler recalls. “I started taking it during the year and then during the summers. By the end of my second year, I had finished most of the undergraduate math curriculum, and by my third year I was taking graduate courses. I was amazed by it, by pure mathematics.”

Altschuler graduated with a bachelor’s degree from the University of Pennsylvania after three years, in 1985. He continued his immersion into the world of mathematics by attending the University of California, San Diego, where he earned a Ph.D. in 1990. After graduate school, Altschuler landed several prestigious fellowship positions, which took him to the University of Minnesota, to the Australian National University, and finally to the Institute for Advanced Study in Princeton, New Jersey. As a fellow, he published on complex mathematical concepts in differential geometry, non-linear partial differential equations and topology, particularly geometric heat flows that deform objects based on their curvature or twistedness.

“I went into pure mathematics just thinking that was all I would care about,” Altschuler recalls of that time. “I had a friend who had gone to Microsoft and I asked him one time, ‘What do you actually do all day?’ And he said, ‘Well, if you’re curious, why don’t you come and figure it out?’”

Altschuler liked what he saw. He accepted a position as a group manager and senior research fellow in 1994 at Microsoft Research, along with his wife, and life-long collaborator, Lani Wu. At Microsoft, they worked together on research focused on bringing computers into the mainstream—how they could apply math to build new ways for people to use computers and make the experience more useful.

“Toward the end of our time there, the same friend who suggested that computer science was on the verge of a revolution mentioned that biology was undergoing a similar revolution. And, right down the street from us was one of the first microarray companies called Rosetta Inpharmatics,” explains Altschuler.

He joined Rosetta as a Research Director in 2000, where he took part in groundbreaking, proof-of-principal projects that developed approaches for large-scale identification of genes  and  prediction of gene function. After a year at Rosetta, Altschuler was pulled completely into the world of biomedical research through an opportunity at Harvard University’s newly founded Bauer Center for Genomics Research, which he joined in 2001 as a Fellow. During his time at Harvard, Altschuler established himself as a biomedical researcher. His lab developed a powerful methodology called “phenotypic profiling” to accelerate drug screening using computer vision algorithms that analyze microscopy images to identify patterns of how individual cells respond to different drug treatments. He was mentored during this time by Thomas Maniatis, a previous Rita Allen Foundation Scholar (1978). 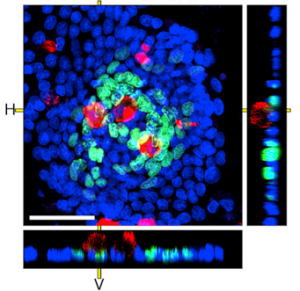 Toward the end of his fellowship at Harvard, Altschuler decided the next step for his career was at the intersection of mathematics and biology. “Doing mathematics was not going to be the highlight—it was going to be a way to get to important questions and answers that matter in biology,” he says. Altschuler moved to the University of Texas Southwestern Medical Center in 2005, accepting a position as an Assistant Professor, and in 2008 he was selected as a Rita Allen Foundation Milton E. Cassel Scholar. As a Scholar, Altschuler was interested in better understanding cellular heterogeneity, or the differences between individual cells that make up a larger population. By understanding the unique responses of cells to drug perturbations, a better understanding of larger patterns and cellular decision making related to health and disease can be uncovered. He also further examined single cell behavior at the molecular level by characterizing subpopulations in immature fat cells, immune cells, and cancer cells. Altschuler also examined how feedback loops in single-celled organisms, such as yeast, leads to spontaneous cellular polarity. This research provides insight into how simple biological processes at the core of larger complex networks can influence cell behavior.

Altschuler left UT Southwestern in 2014 to join the University of California, San Francisco, as a Professor, specializing in systems biology and systems pharmacology.Together with colleagues, Altschuler gains perspectives into tissue patterning and development by studying how the sensory system develops in the fly brain and how gut tissues maintain homeostasis. He also works on projects to understand how biological networks change between health and various disease states.

More recently, his work has focused on understanding how cells make decisions, specifically as they relate to cancer and drug resistance. Altschuler and his research group have investigated the similarities between drug resistance in bacteria and cancer to better understand if the resistance phenotype is a chance occurrence or a recurring event in mammalian regulatory networks. Today, Altschuler continues exploring different approaches that combine biology and artificial intelligence for accelerating the pace of drug discovery.

Here, Altschuler reflects on where biology is heading in the realms of AI, the impact of the Rita Allen Foundation Scholar award on his career, and what his life is like outside of the lab.

What do you remember about the process of becoming a Rita Allen Scholar?

I remember going to New York City to the Princeton Club. I remember sitting outside this big wooden door in the hallway, watching people go in and then coming out looking sweaty, and then it was my turn. I thought, “Oh, my God, what am I going to tell all these amazing biologists that they don’t already know?” It turned into actually a very constructive conversation, and I was always very grateful for that. I wanted to try to understand how [cells] are different from each other. Most of the way that researchers had been looking at biology was to take many cells, grind them up together, and get a number. But, I was really interested in how single cells make decisions and to do that you have to look at single cells. Once you start looking at single cells, you realize that all the cells are kind of different—this is cellular heterogeneity.

These were all pretty complicated ideas, and my first attempts to write papers and get grants on them were not very successful, including very respected people saying, “Why would you care about this?” The Rita Allen Scholar award and the whole experience made me more confident. I was able to recruit the people I needed in my lab to go and start thinking about cancer populations as being heterogeneous collections of cells. We were able to build the technology and do the experiments to measure cell states and measure how they changed. We analyzed how cell populations are compositions of different sub populations, and we started writing the papers that we needed to write to describe our ideas.

What is the future of biology and AI? What big questions do you see on the horizon?

There’s no question that techniques in AI are incredibly powerful. AI is incredibly good at looking through lots of data and finding patterns. There are two main questions you can address with this. If what’s really relevant is to look over an incredible amount of patient data and make a prediction as to what kind of test or drug the patient should have next, it’s incredibly accurate; then that’s a great way to use AI. But, if you want to use AI as a tool to understand biology, then that’s a different kind of application. There you want to give some actual meaning to the patterns. How do you go inside the “brain” of an AI algorithm and figure out what it thought was important about the pattern? The challenge here is to try to understand what it is the computer sees and decide whether you agree how to interpret it.

What advice would you give to the next class of Rita Allen Foundation Scholars?

Without a doubt, it’s follow your passion. When you’re excited about something, find the right place and the right people to work on that. For me, that’s what allowed me to go from the Institute for Advanced Study to Microsoft to a biotech start-up to Harvard University.

I like to make chocolate chip cookies outside of work—to eat them more than to make them. I’ve been trying to get quantitative about cookies, you know, the amount of whole wheat versus white wheat, the amount of baking time, etc.