Growing up in London, Thomas Jessell was immersed in both art and science from an early age. His mother worked as a paintings conservator, while his grandfather was an organic chemist who introduced him to the beauty of molecular structures. “I was torn between whether to train as a biochemist or whether to become an art historian,” Jessell recalls. 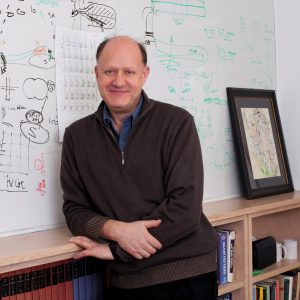 Ultimately, he enrolled in the Department of Pharmacology at the University of London’s Chelsea College. “Molecular biology as a sophisticated discipline didn’t exist in Britain in the early 1970s, so pharmacology was the way that you dissected complicated aspects of neural function,” he says. “I got intrigued by the power of neuropharmacology to dissect circuits and link them to behavior—this is why I became hooked.”

After a year’s training at The London Hospital, Jessell pursued a Ph.D. in neuropharmacology at the University of Cambridge with Leslie Iversen. “It was a time when the function of peptides in the nervous system was first being appreciated,” he says. “I spent most of my graduate career working on one of these peptides, called substance P, which had a long and illustrious history” and was thought to transmit pain and other sensory signals. Jessell and Iversen investigated the actions of substance P in the trigeminal nucleus, a portion of the spinal cord involved in sensing touch, pain and temperature. Their work led to the finding that opiate drugs inhibit the release of substance P from the terminals of primary sensory nerve cells that mediate nociception [the sensing of potentially harmful stimuli].

This type of “presynaptic inhibition,” in which a neuron prevents the excitation of connected neurons, has proved to be essential for the functioning of neural circuits in the spinal cord and other parts of the nervous system. Nearly 40 years after completing his doctoral work, Jessell continues to explore aspects of presynaptic inhibition, albeit in the context of proprioception, which connects sensory information and movement.

“It is rewarding to be able to return to the same general problem and do it in a new, more incisive way,” he says.“That’s part of what science is about—sticking with a problem and letting new technologies reveal new aspects of that physiology.” For instance, Jessell’s research team recently used a combination of molecular genetic approaches and statistical analyses to investigate the diversity of inhibitory neurons in the mouse spinal cord, revealing neural “microcircuits” that control sensory input, as well as hip, ankle and foot movement. 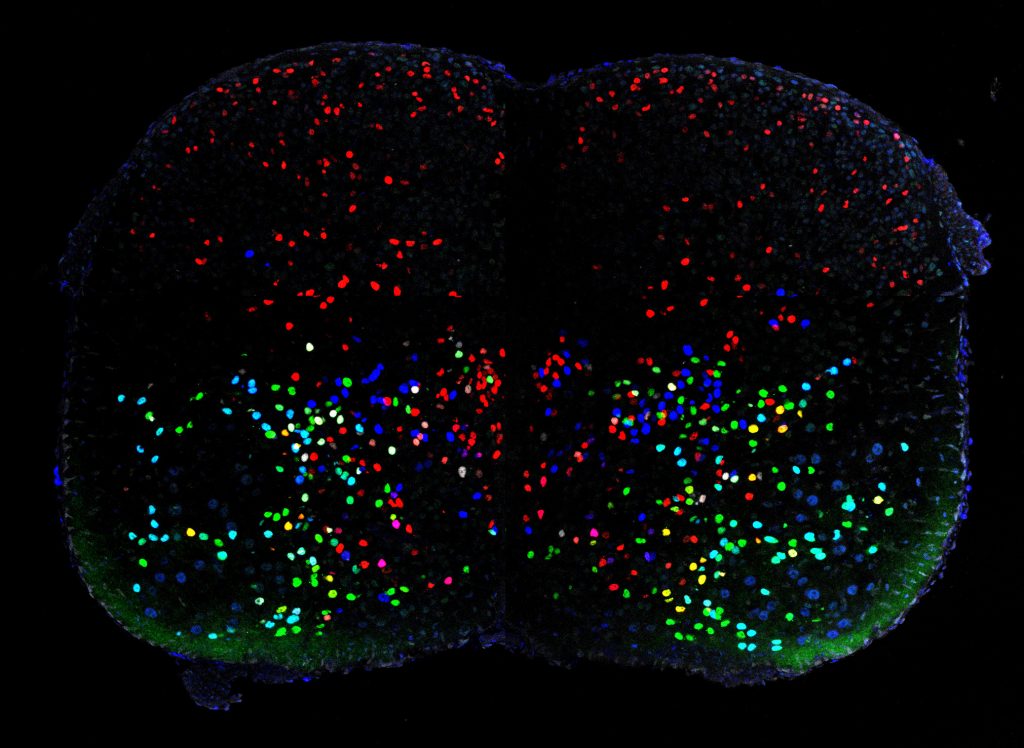 Jessell’s career has paralleled the rise of molecular and cell biology and their applications to neuroscience. He entered the developing field as a postdoc at Harvard Medical School with Gerald Fischbach (now the Scientific Director of the Simons Foundation). “Up till the point that I walked in his lab, I had no concept of the immeasurable interest in cell biology, and Gerry—in one way or another—was a physiologist with cell biological affinity,” Jessell recalls. “I learned at Harvard what cell biology was all about, and I also learned something about the primacy of neuroscience as a new and emerging discipline.”

He joined the Harvard Department of Neurobiology as an assistant professor in 1981, and became a Rita Allen Foundation Scholar in 1984. At the time, Jessell says, “We were just exploring the cell biology of sensory motor transmission. [The award] allowed me to do things with a confidence and with a resolution that would not have happened had I not received that endorsement.” His group examined the localization of specific protein and carbohydrate molecules in spinal cord sensory neurons during embryonic development, providing insights into the maturation of the neurons and the interactions between them.

After moving to Columbia University in 1985, Jessell broadened his studies of signaling and cell patterning in the nervous system. He teamed up with David Julius in Richard Axel’s lab to clone and characterize two subtypes of the serotonin receptor that mediate the effects of this key neurotransmitter, and with his own group began to decipher the chemical cues that guide axons—the long projections of nerve cells—to their targets in the developing central nervous system. Many of their analyses focused on the activities of the notochord and the floor plate, crucial organizing structures for neural development in all vertebrate animals. Jessell and his group later applied their growing knowledge of spinal motor neuron differentiation to demonstrate that mouse embryonic stem cells could be induced to form functional motor neurons.

“It is rewarding to be able to return to the same general problem and do it in a new, more incisive way. That’s part of what science is about—sticking with a problem and letting new technologies reveal new aspects of that physiology.”

Jessell served on the Rita Allen Foundation’s Scientific Advisory Committee from 1999 to 2007. Today, he is a Howard Hughes Medical Institute Investigator, and a Professor of Biochemistry and Molecular Biophysics and Neuroscience at Columbia, where he is codirecting the new Mortimer B. Zuckerman Mind Brain Behavior Institute. His laboratory continues to apply emerging molecular, physiological and behavioral tools to understand how nerve cells in the spinal cord control movement.

Here, Jessell considers the potential of new techniques to answer old questions, reflects on the joy of discovery, and shares one of his sources of inspiration.

What is most exciting about your current research?

The brain only does three things: it extracts information from the sensory world around it, it stores and retrieves that information when useful, and it converts it into behavior through action and movement. Half the brain is designed to activate behaviors through movement in very precise ways. And the minute you stop to think about that, it poses all sorts of questions and challenges that we are trying to answer, in small ways, through mouse genetics. I know that in my lifetime I’m never going to achieve a satisfying answer, because these are big cognitive problems…you have to realize the impact that you are going to make on a field is limited by the enormity of the problem. You have to set your goals on small, incremental discoveries that drive a field forward.

I am still studying presynaptic inhibition in the spinal cord—through an interest and an access to this one small set of inhibitory interneurons. Suddenly we can approach things that we were puzzled by in the past, and now there are reagents and methodologies that have never been dreamed of before: gene targeting to manipulate individual neuronal populations in mice, the ability to manipulate proteins through expression of toxins that kill neurons, or the ability to activate neurons with precision. Now we are in a position to address some of the major challenges in the field, to resolve why presynaptic inhibition is so important. We’ve answered that at one level, but of course every answer is associated with dozens more questions.

What do you think young scientists need to be successful?

The first advice I give to young scientists is to do what you’re passionate about, because your ability to make interesting observations will depend on that. And what is in vogue today will be not necessarily the stuff of the moment tomorrow. Who can judge what is relevant in science?

I also tell my graduate students that during the course of their Ph.D. career they will discover something that is new and has never been realized in the history of humankind. It may not be a big thing, but it’s going to be something, and you have to revel in that little element of discovery. I think that’s what makes an interesting scientist: the curiosity, the persistence and the gratification when you discover something, no matter how small, about something you care about.

When you aren’t in your lab or helping to direct the Mind Brain Behavior Institute, where might we find you?

You might find me in Chelsea art galleries looking at various productions by artists, which are very similar to the scientific pursuit. In both science and art, you’ve got to be comfortable doing things at the very edge of rationality, and trying to change things and trying to express your intuition and passion. When I’m deeply troubled about something that’s gone awry in the lab, it’s amazing the beneficial influence of immersing myself in the world of art—shaking me out of myself and inspiring me in a different way. So I like doing that, and I like walking up and down Broadway, observing anonymously the rich world that is New York City.