Robert Weinberg, a 1976 Rita Allen Foundation Scholar and Massachusetts Institute of Technology professor known for seminal findings on the origins and development of cancer, is one of two scientists to receive the 2016 Medal for Research Excellence awarded by the Salk Institute for Biological Studies in La Jolla, California. 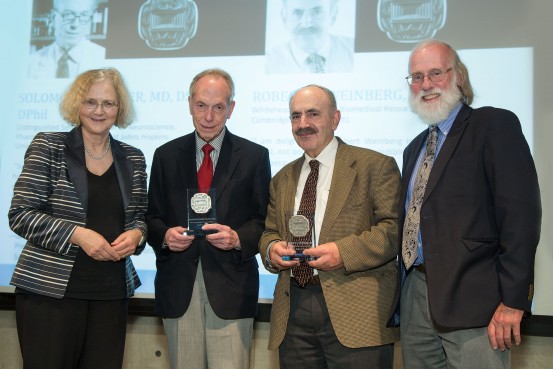 “Robert Weinberg’s work has changed the world’s understanding of cancer,” said Elizabeth Blackburn, President of the Salk Institute, in a news release announcing the awards. Also receiving a medal was neuroscientist Solomon Snyder of Johns Hopkins University School of Medicine. “It is pioneering careers such as [Snyder’s and Weinberg’s] that embody the spirit of Salk’s research excellence honor,” Blackburn added.

Weinberg is a founding member of the Whitehead Institute for Biomedical Research, director of the MIT Ludwig Center for Molecular Biology and Professor of Biology at MIT. He earned both B.S. and Ph.D. degrees from MIT. He has received the National Medal of Science, as well as the Breakthrough Prize in Life Sciences, the Albert Einstein World Award of Science, the Keio Medical Science Prize and the Wolf Prize in Medicine. He is a member of the U.S. National Academy of Sciences and the Royal Swedish Academy of Sciences.